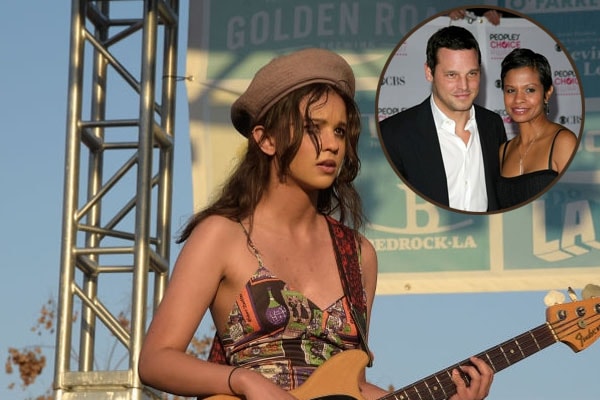 The former fashion model Justin Chambers‘ daughter Eva Chambers was born on the March of 1999. Justin had her daughter with his wife, Keisha Chambers.

Justin Chambers is a proud father of five children, and the gorgeous Eva has got four siblings. She has got three elder sisters named Isabella Chambers, Maya Chambers and Kaila Chambers, and a younger brother named Jackson Chambers. Amongst all, Eva is the youngest daughter of Justin and Keisha.

Not many people may have known this, but Justin Chambers’ daughter Eva Chambers is a member of the Pinky Pinky band. Well, it is a 3-piece proto-prog inspired band. Eva is the bassist of the band, and the other members are Isabelle Fields, the guitarist and Anastasia Sanchez, vocals and drummer. And as per their site’s description, they preach nothing but good clean fun.

At times Justin Chambers tweets about his daughter and her band Pinky Pinky and asks his followers to check them out. It seems Justin supports his daughter Eva in her musical endeavour.

Eva Chambers’ band Pinky Pinky has released two albums, Pinky Pinky and Hot Tears. Some of the band’s hit songs are Margaret, Ram Jam, Robber, Hot Tears and others. The band also does shows and perform at different venues and events. Well if this continues then, Justin Chambers’daughter Eva Chambers’ popularity would skyrocket and even surpass her dad someday.

As stated earlier, Justin Chambers supports his daughter Eva on her work, so no wonder the father-daughter pair has got a beautiful bond. She can be spotted with her father Justin attending different events and programs.

Eva Chambers seems so much occupied on her musical career that she is yet to be connected with social media network including Facebook and others.

The name Eva is the Latinate counterpart of English Eve. It is derived from the Hebrew name which means ‘living one’ or ‘life.