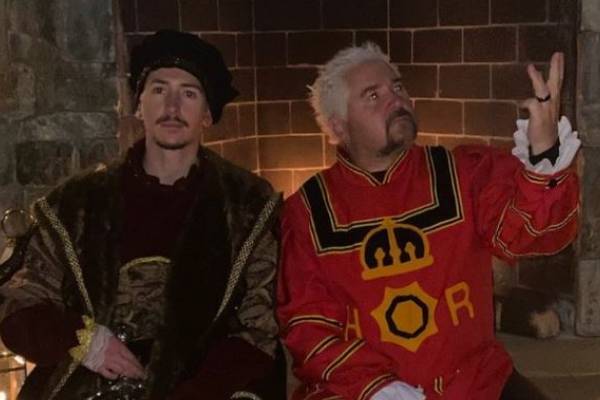 Guy Fieri is an American restauranter and popular television personality. He was born in Columbus, Ohio. Fieri is currently the face of a popular television network, Food Network. He first appeared on television as a contestant of a reality show, The Next Food Network Star, in its second season. Guy went on to win the show and secure himself his own show on the network.

Apart from his fame and popularity in the food and cooking world, Guy is a happy husband and father to his two sons. He is married to his adorable wife, Lori Fieri. The couple has two sons, Hunter Fieri and Ryder Fieri, together.

So, today we will be talking about Guy Fieri’s son Hunter Fieri getting to know him better. Here are some interesting facts about Hunter.

Hunter Fieri Is An Alma Matter Of UNLV

Hunter is the oldest son of Guy Fieri and Lori Fieri. He was born on 13th August 1996 in California. He completed high school in his hometown. After completing his studies, he went to UNLV.

The University of Nevada, Las Vegas (UNLV) is one of the world’s most prestigious and respected colleges. Guy Fieri’s son, Hunter Fieri, graduated from UNLV. Before leaving for Las Vegas, Hunter and his father went on an adventurous trip to Europe.

Hunter was asked about his choice to join UNLV, and he responded by saying that the college offers one of the best hospitality education, which is why he wanted to get his degree from UNLV. Luckily, he succeeded in doing so and can call himself a proud alma of the university.

His Father Guy Fieri Is An Emmy Award Winner

As mentioned above, Hunter Fieri’s dad Guy Fieri is the face of Food Network. He has run different culinary shows in the past 15 years on the network. However, his most popular and admired shows have been Guy’s Ranch Kitchen, Guy’s Big Bite, and Diners, Drive-ins and Dives.

Nonetheless, for his contribution to the food world, Hunter’s father Guy has been nominated for the Emmys nine times and is a winner of the prestigious award. His show Diners, Drive-ins and Dives was nominated five times in a row from 2014 to 2019 for an outstanding structured reality program. In addition, he won the award for his show, Guy Fieri’s Family Reunion.

He Has Worked With His Dad On The Television

Hunter has appeared on many of Guy’s shows like Diners, Drive-Ins, and Dives and Grocery Games. He considers his father as his biggest motivator and teacher. Hunter has also described that he has learned a lot working with his dad.

The father-son duo is currently actively hosting the Grocery Games in the Food Network. Before working on the television, Hunter interned at Guy’s restaurants. He even worked as a dishwasher back in the days before making his way up as the Fieri’s are not fond of Nepotism.

Guy Fieri’s Son Has Over 100K Followers On Instagram

Guy Fieri’s son Hunter Fieri is a very popular figure on social media. He has accumulated over 100 thousand followers on his Instagram account.  Substantially, Hunter might have gathered this huge following due to his constant presence in the television world these days alongside his father. He uses his social media as a great platform to promote plants and food.

Furthermore, Hunter has also recently appeared in a documentary promoting plants and the evolution of food. He has attached the link to this documentary on his Instagram bio. He discusses the importance of pulse crops and the benefits of food crops in the documentary.

It seems Hunter is very busy with his professional life. He is single as of lately. There have been no records of any of Hunter Fieri’s girlfriends. He is living with his family happy in their California mansion. Furthermore, Hunter has never been engaged or married.

Hunter has just begun his career and is even thinking of doing something bigger. He doesn’t want to be remembered as Guy Fier’s son and wants to create his own fame. So, looks like Hunter is currently focused on his career rather than relationships.

Hunter Has A Tattoo To Honour His Father

On 22nd May 2019, Guy got his own star in the lavish Hollywood Walk of Fame. He is only the third chef to be part of this fabled walk. So, to honor this moment, Guy Fieir’s son Hunter Fieri tattooed the star on his arm as a tribute.

Hunter even took center stage and delivered a moving speech. He called his father his best friend, mentor, and his idol. The 25-year-old took to Instagram to display his tattoo in honor of his dad.

It seems Guy Fieri’s son Hunter Fieri really admires him, and the father-son shares a special bond. We wish the Fieri family all the best for their future.

Hunter is a tribunal English word. It means a person who likes to hunt.