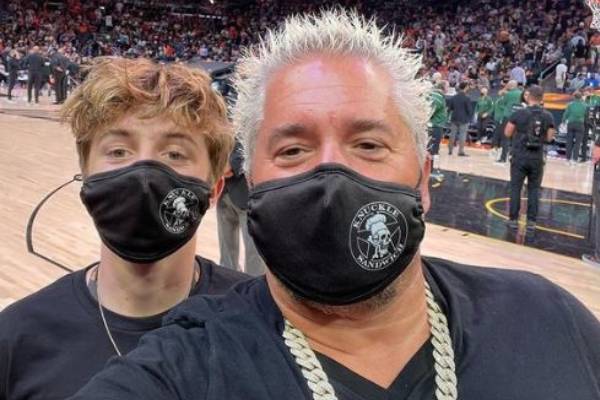 Guy Fieri is a popular chef and food show host who has made a name for himself in the television industry. He has also appeared as a judge for many food reality shows. Before being a judge, Guy was a contestant in a reality food show called Food Network Star in 2006. Eventually, he won the show and was given his own show at the network.

Since then, Guy has been the face of Food Network. But, apart from television, Guy is a family man. He has been married to Lori Fieri since 1995. During their marriage of over two decades, the couple has given birth to two amazing sons. Hunter Fieri, their eldest child, is following in his father’s footsteps.

However, their youngest kid, Ryder Fieri, is not talked about in the media. So, in this article, let’s learn about Guys Fieri’s son Ryder Fieri who is away from the media limelight.

Guy Fieri’s son Ryder Fieri was born almost a decade apart from his oldest child, Hunter. Ryder was born on 31st December 2005 in California. He goes to the Westlake High School in Westlake, California. Ryder’s great-grandparents are of Italian descent. His father, Guy, changed their surname from Ferry to Fieri after his marriage to honor their heritage.

Ryder is currently still a student at Westlake High school. He is active on various social media platforms. Similarly, it seems he loves to hang out with his school friends and have a good time. He can be seen going out with them on trips and partying on his Instagram account.

Also Read: Get To Know About Zac Taylor’s Son

His Brother Is A Famous Television Personality

After completing his studies, Ryder’s brother interned at a couple of their father’s restaurants. However, Hunter was not introduced into the television by Guy until he reached his 20s. So, maybe Ryder Fieri’s father wants him to enjoy his teenage years. Perhaps, he will introduce his younger son in his latter days if he wishes to follow in his brother’s and father’s footsteps.

As mentioned above, Ryder Fieri is quite active on social media. Looking through his Instagram account, it seems he enjoys going on long tours and getting involved in outdoor activities. He has posted pictures of him surfing, skateboarding, and swimming.

Talking about his son, Guy once mentioned that Ryder is very good at playing basketball, pool, and surfing. He also plays school basketball in his high school. Furthermore, he can also be seen going on hikes with his father and brother on their social media. In addition, his father has posted videos of him playing basketball for his school.

Currently speaking, it looks like Ryder is more fond of outdoor activities than cooking. Neither Guy nor Ryder has mentioned anything about the young ones’ interest or passion for cooking. He is more into basketball and other outdoor activities.

However, it is too early to assume what might happen in the future. Ryder is just a teenager studying in a high school. Nevertheless, it won’t come as a surprise if Guy Fieri’s son has an interest in food and decides to follow the family profession. If that were to happen, we are sure that his family would welcome him, trying to give their guidance.

Ryder means messenger or a mounted warrior. The word is of English origin.