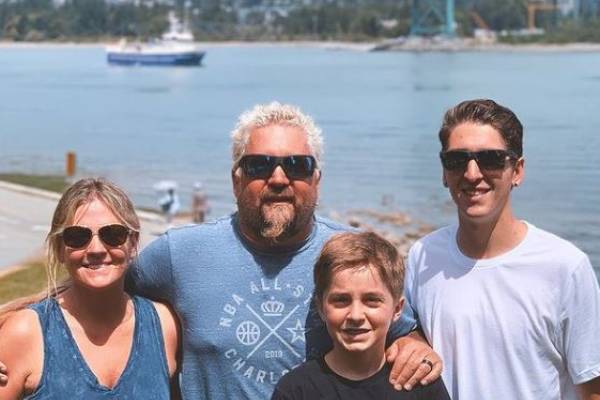 Guy Fieri is married to his lovely wife Lori and are proud parents of 2 sons. Image Source: Guy's Instagram.

Guy Ramsay Fieri aka Guy Fieri,, is a famous American television personality. He is a restaurateur and author. Fieri is an Emmy Award-winning television presenter. Furthermore, he owns three restaurants located in California.

Over the years, Guy Fieri has hosted a lot of shows on the Food Network. However, his interest in food and cooking developed while he was a foreign exchange student in France. He enrolled in the University of Nevada, Las Vegas, and completed it with a degree in Hotel Management.

Fieri’s television career began after winning the second season of The Next Food Network Star. He was rewarded with his own cooking show on Food Network with six episodes. Since then, he has been actively working with Food Network, hosting and running many shows related to food and cooking.

Besides his professional career, Guy is also a family man. He is married to his lovely partner Lori Fieri. The love birds have two kids together. So without further delay, let’s dive into today’s topic and talk about Guy Fieri’s wife, Lori Fieri, and their beautiful kids.

Lori Met Guy In A Restaurant

Well, it might come as no surprise to know that the lovely couple met in a restaurant. Lori walked into one of Guy’s restaurants with her friend in Long Beach, California, in 1992. As soon as Guy saw her, he knew she was the one. Interestingly, Lori’s friend had been let go from the place Guy was working in. So, he pulled Lori’s mate to the side to say she had to wait a few more weeks before she could come in.

Astonishingly, Guy didn’t want them to leave either. So, he told them to maintain a low profile and take their seats. Soon after, the three started talking with each other and had a fun time. Actually, Lori was making a cross-country trip from Rhode Island to San Diego, but thanks to Guy, Lori never made it to San Diego. To impress her, he cooked something special which, interestingly, he doesn’t remember now.

Lori was quite impressed with what Guy had mad for her. They both were food lovers, enjoyed their time together, and have been together since.

Guy Fieri’s Wife Is A Mother Of 2 Sons

After three years of knowing each other, Lori and Guy married in 1995. Their marriage of over two decades is a thing of awe. Soon after marriage, the couple changed their nickname from Ferry to Fieri to honor Guy’s late grandfather. He was an immigrant from Italy who moved into New York City.

Guy Fieri’s wife Lori Fieri gave birth to the pair’s oldest son Hunter Fieri, on 13th August 1996. The same year Guy launched his premiere restaurant, JohnyGarlic’s, in his hometown of California. Hunter has developed an interest in his father’s food and cooking field.

Hunter Fieri was 13 years old when he first cooked Guy a pasta and steak birthday dinner. Growing up, he always found himself near the kitchen and cooking. But, as a kid, Lori’s son wanted to be a race car driver. He recalls this as crazy because he was young at that time.

Nonetheless, Hunter started working at his father’s restaurants at Johny Garlic’s and Tex Wasabi’s. He began as a dishwasher because Nepotism is not part of Fieri’s vocabulary. Hunter even ran saute on Saturday nights.

Lori Fieri’s kid Hunter graduated from the University of Nevada, Las Vegas (UNLV) in 2015 from hospitality. Soon after graduating, he went on a holiday with his dad. After returning, he interned under Caesar’s group. It is a popular group where chefs like Gordon Ramsay, Giada De Laurentiis, and Bobby Flay have their restaurants.

Like his father, Hunter is currently a television personality in the food and cooking world. He co-hosts a show called Grocery Games with his dad on Food Network.

Guy Fieri’s wife Lori Fieri must be a proud mother seeing her son following in Guy’s footsteps, working his way to the top without any sort of Nepotism.

Hunter is a gender-neutral word. It is of English origin, which means one who hunts.

Ryder is an English and Dutch variant word. It means messenger or a mounted warrior.