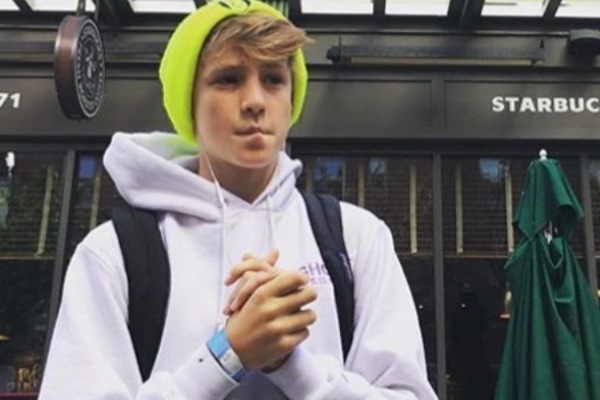 Will Ferrell's son Magnus Ferrell is an emerging actor and a singer. Image Source: Social Media.

Will Ferrell is an American comedy actor known as the part of Frat Pack who are a group of comic actors who emerged in the late 1990s and the 2000s. After making a name for himself through Saturday Night Live, Will went on to play quite a lot of movies like Stepbrothers, Anchorman: The Legend of Ron Burgundy, and Talladega Nights.

Well, Will’s exploits in the comedy sector are not something unknown to us, but what might be unknown is his personal life. The comic is married to Viveca Paulin for more than two decades, and the couple is parents to three wonderful children. Out of those three, we have gathered some interesting facts about Will Ferrell’s son Magnus Ferrell, so don’t forget to read the whole article.

Eldest Son Of Will Ferrell And Viveca Paulin

Born on March 7, 2004, Magnus Paulin Ferrell is the eldest son of actor Will Ferrell and his wife, Viveca Paulin. The pair got married in 2000, but it took them more than a couple of years to give birth to their first child. Will’s son Magnus brought a lot of joy into the family, which sure was a need. Will had to manage his tight schedule during Magnus’s birth, and he did in a great way.

After Magnus’s birth, his two brothers Mattias Paulin Ferrell and Axel Paulin Ferrell, followed him in 2006 and 2010, respectively. The three brothers are pretty close to each other and spend a lot of time together. Will must be very proud that all of his children are growing up great. Magnus being the eldest of the bunch is responsible for his siblings too, and they must look up to him.

Will Ferrell’s Son Magnus Starred Alongside His Father

Will Ferrell’s kid Magnus is already following in his dad’s footsteps. He made his acting debut in the 2013 movie Anchorman 2: The Legend Continues, where he appeared as the Sea World Kid. Will was the lead actor in this film, and he must have inspired Magnus a lot to take on the role. Magnus was also part of the 2017 video documentary short If You Build The House They Will Come.

Magnus is nothing short of emerging talent, and with a father like Will, he will surely go miles. He grew up watching his father in different roles, and it must have inspired him a lot. The 16-year-old is still pretty young, and let’s hope we see him taking on the big roles pretty soon.

In an episode of Ellen Degeneres’s show, Mark Wahlberg mentioned that his daughter Ella Rae and Will Ferrell’s son communicate regularly with each other. Mark even went on to humorously say that it was disturbing. He later added that Magnus was a sweet boy.

Ella is of the same age as Magnus, and the two seem to very close to each other. Let’s hope we get to see them together like the friendship of their fathers.

Magnus Has A Sense Of Humor Like His Dad

How can you not inherit the charming sense of humor of Will Ferrell if you are his son? Even though Will’s three kids are not his biggest fans, they have got the same sense of humor as their dad. Will said in an interview with Parade in 2018 that Magnus is subtly funny in his own way. One of those instances was when he burrowed glasses from a friend for his yearbook photo, although he does not wear glasses. Will definitely appreciated his sons’ humor and even suggested him to do that every year.

Magnus Is Also A Talented Singer

Apart from acting, Will Ferrell’s son Magnus also has a deep interest in singing. Going through his Instagram handle, we can see that he has a beautiful soothing voice. He has done covers of different popular songs on his page, and fans and friends seem to love it. Magnus is proving to be a multidimensional character, and only time will tell which path he will follow.

Whatever field Will’s kid Magnus chooses, one thing is for sure that he will have full support from his parents. We, as fans, can not wait to see how this kid will perform in the future; let’s wish him the best for the coming days.

The name Magnus means ‘Great’ and is of Latin Origin.