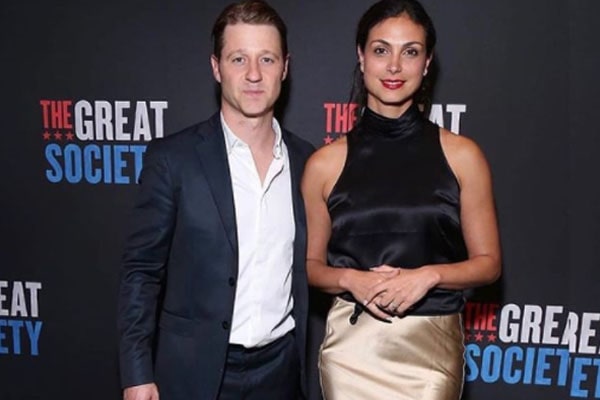 Morena Baccarin is a well-known Brazilian-American actress famous for playing the role of Inara Serra in the Sci-fi series Firefly. Also, she is popular among millions of people worldwide for portraying Vanessa in the superhero comedy movie Deadpool and its sequel Deadpool 2. Moreover, Baccarin’s acting credit goes to several other blockbuster movies and TV shows, including Homeland as Jessica Brody, for which she won a Primetime Emmy Award nomination in 2013.

Morena Baccarin, who works on behalf of refugees with the International Rescue Committee, is currently in a marital relationship with her Gotham co-star, Ben McKenzie. Together, the married pair has a daughter named Frances Laiz Setta Schenkkan, whom they welcomed in 2016. Here, meet Morena Baccarin’s daughter, Frances Laiz Setta Schenkkan, and get to know some more about her.

First Child Of Morena Baccarin With Her Husband, Ben McKenzie

Frances Laiz Setta Schenkkan is the firstborn of the celebrity couple Morena Baccarin and her beloved husband, Ben McKenzie. The couple gave birth to their daughter, Frances, on 2 March 2016. They named her after McKenzie’s mother and call her Frankie.

Like many other parents, Frances’ mom and dad were also very excited way before her arrival. While talking to People, her dad, Ben McKenzie, told the reporter that being a father was something he had wanted for a long time. He added that he was excited about her arrival and do all the duties of a dad. Baccarin feels so proud to have McKenzie as her partner and father of her kids.

Furthermore, Morena Baccarin’s daughter, Frances Schenkkan, started talking quite a bit when she turned two years old. Baccarin told the People magazine that her little girl sounded a little like a caveman at that moment. She added that everything was me, like ‘me take that’ or ‘me want that too.’

Currently, Frances is five years old and enjoys doing various toddler activities. She likes playing with her dolls, learning new things practically, and spending most of her time with her dad than her mom.

Morena Baccarin and Ben McKenzie tied their marital knot on 2 June 2017 in a private ceremony at the Brooklyn Botanical Gardens in New York. This is the second marriage of Morena Baccarin, while it’s first for McKenzie.

Morena Baccarin’s daughter, Frances Laiz Setta Schenkkan, became a proud big sister for the first time with the birth of her brother, Arthur Schenkkan, in March 2021. Besides, she has a half-brother named Julius Chick from her mom’s previous marriage with the filmmaker Austin Chick. Frances’ half-brother, Julius, is three years older than her.

Cute daughter of Morena and Ben, Frances enjoys spending time with her siblings. They can often be seen on their parents’ Instagram page having fun together, visiting different places, and playing with their parents. Frances and her siblings even sometimes go to meet their father in his workplace with their mother.

Furthermore, though Frances’s parents often post her pictures on their social media pages, they always make sure that her face is hidden. It seems like they currently want to keep her away from the media limelight so that she can enjoy her childhood without being affected by her parents’ stardom.

But, we hope Morena and Ben will reveal more about their daughter shortly so that their fans can know more about her. Or, who knows. The couple’s little girl, Frances Laiz, might show interest in social networking handles in the near future. So, for now, we just need some more patience and wait for it.

The girl’s name Frances is of Latin origin, which means free one.