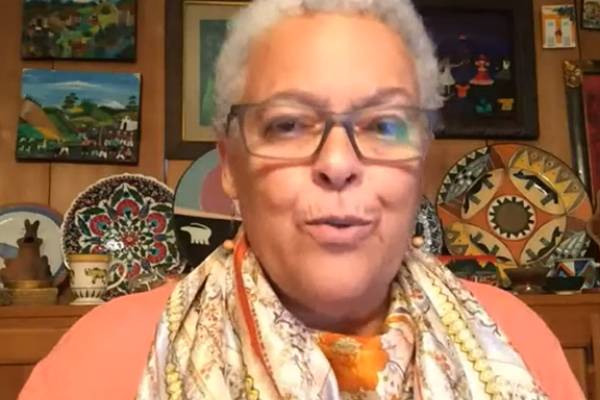 The famous singer, actor, and activist, Harry Belafonte is one of the most influential personas in the American music industry. With his career stretching over seven decades, he has gained immense fame and fortune in his profession. Owing to his reputation, his personal life has become the subject of interest to the public.

Talking about the legendary figure’s personal affairs, he has been married thrice. In addition, he is also a doting dad to his four children. So, today let’s get to know Harry Belafonte’s daughter, Adrienne Belafonte Biesemeyer in this article.

Is The First Born Of Her Parents

Adrienne Belafonte Biesemeyer is the first child of Harry and his first wife, Marguerite Byrd. The ex-pair were married from 1948 to 1957. A few years later, the Belafonte-Byrd couple welcomed their second baby girl, Shari Belafonte, on 22 September 1954.

Similarly, after ending his bond with her mom, Adrienne Belafonte’s father tied the knot with a former dancer, Julie Robinson, in 1957. They were together for about five decades before ending their marriage in 2008.

Together with his second wife, the Jamaican-American singer has two more kids, David Belafonte and Gina Belafonte. Moreover, he is now happily married to his current spouse, Pamela Frank. The duo doesn’t have any babies together.

Therefore, Adrienne has one sister and two half-siblings. Furthermore, she and Shari lost their mother, Marguerite, in 1998 in Washington D.C.

Harry Belafonte’s Daughter Is A Counselor

The activist’s little girl is a college graduate. She earned her Bachelor of Arts degree from West Virginia State College. In addition to that, she has also completed her master’s degree in community counseling from Marshall University.

Having earned degrees in counseling, Arienne became a licensed professional counselor. She did a private counseling practice in different companies namely, West Virginia School of Osteopathic Medicine, etc. Also, her practice focused on children and their families.

Aside from that, in 2016, Adrienne got a Humanitarian award for her contributions to human rights.

Honored to present the 2016 Humanitarian Award to Adrienne Belafonte
Biesemeyer for her Human Rights contributions pic.twitter.com/R1W28tb4ET

Moreover, the professional counselor is also an executive director of the Anir Foundation. It is a volunteer program that creates volunteer opportunities for North Americans to focus on social change in underserved Southern African communities. The actor and songwriter’s daughter has dedicated her life to helping others just like him.

Is A Loving Partner To Her Spouse

Harry Belafonte’s daughter exchanged wedding vows with David Biesemeyer in 1974. It has been nearly five decades since their marriage, and the lovebirds are still happily together.

Adrienne Belafonte Biesemeyer’s husband is also involved in Anir Foundation. However, the details of his profession and family background are still confidential. But it is safe for us to say that the Biesemeyer pair is living a comfortable life together.

A Doting Mother Of Two Children

As mentioned above, Harry Belafonte’s first daughter has been married since 1974. Apart from marital bliss, Adrienne and her spouse are blessed with two amazing kids, Rachel Blue Biesemeyer and Brian Biesemeyer.

Additionally, the Biesemeyer couple are also grandparents. Their son Brian and his spouse have a daughter, Isabella Biesemeyer.

Adrienne Belafonte Biesemeyer’s daughter, Rachel Blue, graduated from Antioch College in Yellow Springs, Ohio, with a degree in Dance. She is fluent in ASL and is an animal education specialist for Wildthings Inc. in Salinas, California. In addition, the mother-daughter duo started the Anir Foundation together.

Nonetheless, Harry Belafonte’s daughter is doing well both in her personal and professional life. She is a generous woman who has dedicated her life to helping needy people. We wish Adrienne a happy life ahead.

Adrienne is the feminine form of the male name Adrien. The name is of French origin that means The Dark One or from the city Hadria.