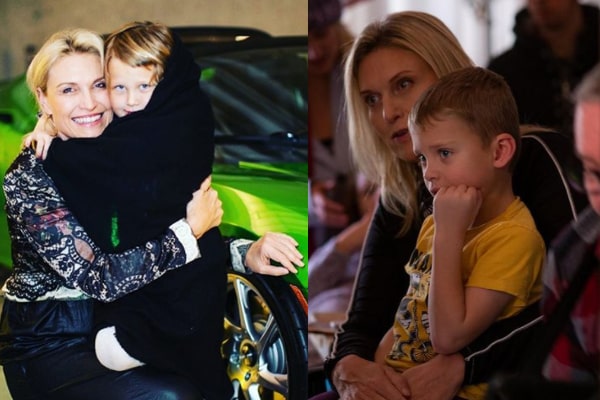 The youngest of Maye Musk‘s children, Tosca Musk, is a successful film producer and director. The CEO of Passionflix has worked with several notable names throughout her career as a filmmaker, and hence her net worth has escalated predictably.

Besides having a thriving career and growing production company, Tosca Musk is also a doting mother of two kids she welcomed through IVF. Moreover, we have heard a lot about Musk’s career achievements, but we know very little about her parenting and lovelife. Therefore, here is everything about Tosca Musk’s twin children, Isabeau Musk and Grayson Musk.

As mentioned earlier, Maye Musk must have been a very proud mother as all her kids grew up into business mogul in their respective paths. While Elon became a tech-tycoon and Kimbal chose a restaurant as his field, Tosca tried her luck in cinematography and has never looked back.

The only thing Passionflix’s co-founder, Tosca, seems to have compromised is her love life. Instead of finding the man or companion, she opted for IVF and welcomed adorable fraternal twins in 2013. Moreover, according to Telegraph, her mother, Maye, helped her choose a suitable sperm donor.

As a result, Tosca Musk’s love life is buried and probably relegated romance to the page and screen. Furthermore, she is reportedly efficient in real life and is raising her kids to learn the reality of life.

Moreover, nothing much is revealed about Tosca Musk’s twins, but she does share adorable pictures via her social media handles. Similarly, her kids, Isabeau and Grayson, are very close to one another and are genuinely beautiful. Again, Isabeau has gorgeous blue eyes and has a charming smile.

Isabeau seems fun-loving and mischievous, while Grayson is into typical boys’ stuff like football and camera. They also accompany their mother in street strolling and in gardens. Besides, both the fraternal twins are in love with their grandmother, Maye.

Tosca’s Mother, Maye, Moved To LA After Their Birth

Likewise, Grayson seems to love photographs as most pictures Tosca posts’ courtesy goes to him. Similarly, their grandmother, Maye, also uploaded throwback pictures of the three together. She further revealed that the arrival of Tosca’s twins made her move to LA, and that changed her plans.

Well, Tosca Musk’s twins, Isabeau Musk and Grayson Musk, are very close to their grandmother. They often spend time together while Tosca is away shooting.

Moreover, Maye often posts pictures of her grandchildren on her social media with heartwarming captions. In other words, she updates on Isabeau and Grayson’s whereabouts every once in a while.

Interestingly, Tosca Musk’s twins used to be Maye Musk’s youngest grandchildren until Elon Musk‘s son, X Æ A-Xii, was born on May 4, 2020. Likewise, Isabeau and Grayson must be very close to their cousins, Kimbal Musk‘s children, with Christiana Musk, as they are reportedly of the same age.

Although Tosca prefers to keep her children away from the media scrutiny, did you know they acted a small role in one of her movies? Continue reading to learn which one.

Appeared In One Of Passionflix’s Originals

Moreover, the filmmaker-cum-mother, Tosca, proudly announced that she was casting her twins for the wedding scene of the romantic movie, Crashed. Both Maye and Tosca shared the news very ecstatically via their respective social media handles.

The proud mama of two, Tosca, is delighted and fulfilled with her career and from motherhood. Although her schedule is hectic, she manages to remain humble and make time for her babies.

Moreover, Musk’s children visit her in the set sometimes, which, according to her, fills her with joy. Therefore, she enjoys being a single mother and refuses to disclose her relationship status with the public.

While biding 2020 goodbye, she counted her blessings, including working actively amidst the pandemic and taking her kids with her. Also, Tosca Musk’s twins, Isabeau Musk and Grayson Musk, are still very young to appear in the spotlight.

Therefore, time will tell us if Isabeau and Grayson choose to stay in the limelight and work in the industry or alter their careers altogether. Until then, let’s hope to see them in the future with a more robust career than their mother’s.

The name Isabeau means God’s promise and has Hebrew origin. Likewise, Grayson has a mid-English origin which means son of a steward.