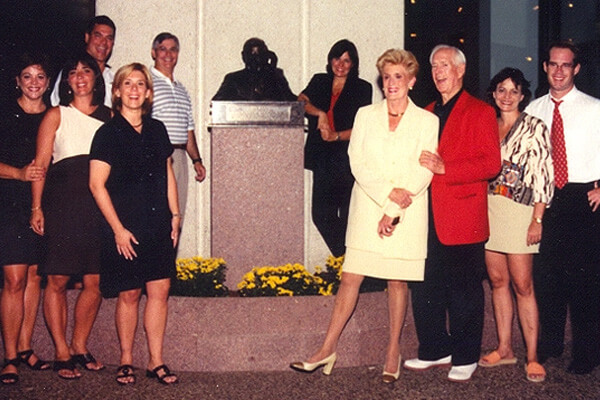 It might come as a shock to some people that one of the most popular American sportscaster, Jack Buck, has altogether eight children. As for his married life, Jack Buck had two wives, Alyce Larson, and Carole Lintzenich. Jack was divorced from his ex-wife Alyce, while his wife Carole became his widow following his death. Jack Buck died on June 18, 2002, in St. Louis, Missouri, USA.

Here are the details of the late Jack Buck’s eight children born to his two ex-wives.

Jack Buck’s son, Joe Buck, is a famous sportscaster like his father. Joe was born to Jack Buck’s second wife Carole. He is currently in a married relationship with Michelle Beisner-Buck. Joe Buck and his wife Michelle have twin children named Wyatt Joseph And Blake Andrew. He also has two daughters named Trudy Buck and Natalie Buck with his ex-wife Ann Buck.

Jack Buck’s daughter Julie Buck is a successful writer. Born on June 15, 1972, Julie has published two books, Tainn: The Half Demon as well as her father’s biography, Jack Buck: Forever a Winner. She wrote the biography with her mother, Carole, and brother, Joe Buck. Julie is married to her husband, whose name is not known.

Jack Buck’s son, Jack Buck Jr., is successfully pursuing his career in his own field of interest. He is not widely known and there is little information available about Jack Jr’s personal life.

Jack Buck’s daughter Bonnie Buck was born through her mother Alyce Larson. The details regarding Bonnie Buck’s married life and other details of her personal life have not been disclosed.

Jack Buck’s daughter Christine Buck is a retired talk show host and TV news anchor who worked with KPLR-TV most of her career. Christine’s career in television spanned over 40 years. Information regarding Christine Buck’s marriage and past affairs are still kept under curtains.

Jack Buck’s daughter Betsy Buck is an American woman. Betsy’s mother is Alyce Larson. Information about Betsy Buck’s marriage and relationship status are not been disclosed. Wherever she is, we hope Betsy is doing well.

Jack Buck’s son Dan Buck went to his father’s funeral. Dan Buck is happily married to his beautiful wife and is a father to his loving children.