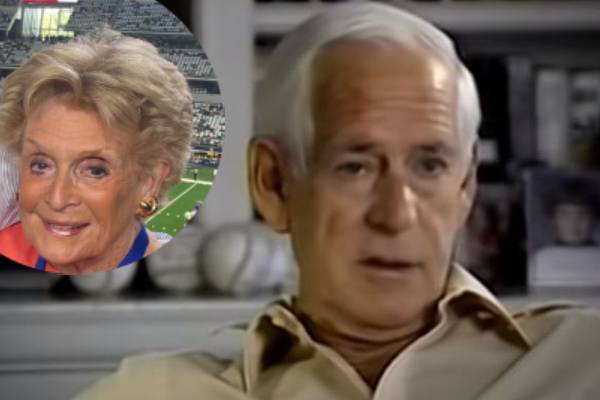 Jack Buck and Carole Lintzenich got married in 1969 and were married for over three decades. Image Source: Social Media.

Jack Buck, born John Francis Buck, was a sports commentator who had gained fame for announcing MLB games of the St. Louis Cardinals. He had served in the military too. He was regarded as one of the most influential figures in baseball sports and had gained a significant height of fame and considerable fortune to his name.

Well, Jack had been married twice in his life. After his divorce from his first wife, he had tied the knot with Carole Lintzenich. So, naturally, people are curious to learn where his second wife is and what she does these days.

So, in this article, how about we know in detail about Jack Buck‘s wife, Carole, and her whereabouts?

As stated earlier, Jack Buck had been married twice in his life. He was married to his first wife, Alyce Larson, for 21 years, from 1948 to 1969. After they got divorced, the former couple moved on in their respective lives. However, the same year that he divorced his former wife, Alyce, he married Carole Lintzenich in March. They tied the knot in a wedding ceremony held in Hillsborough County, Florida.

However, it has not been revealed when Carole and Jack met and if they dated before tying the knot. Nevertheless, the couple loved each other deeply and supported each other.

Was Born In Missouri

Jack Buck’s spouse, Carole Lintzenich was born Carole Lynn Lintzenich on August 18, 1939. She grew up in Missouri, with her dad, Joseph Francis Lintzenich, and her mother, Lillie Irene Hagemeyer. It is not known if she is the only child of her parents or if she has any siblings. She must have had a great childhood while growing up.

Carole Lintzenich and Jack Buck were married in 1969. In their marriage of 33 years, the couple welcomed two kids, a son, and a daughter. On April 25, 1969, Jack Buck’s wife, Carole, gave birth to their first child, Joe Buck, born Joseph Francis Buck. Three years later, on June 15, 1972, she gave birth to their daughter, Julie Buck.

Carole Lintzenich’s son, Joe, followed in his dad’s footsteps and became a sportscaster. He has gained significant fame for his work with Fox Sports. Furthermore, Buck is regarded as one of the most heavily criticized sports announcers. He has worked with several sports channels in his career.

Moreover, Carole’s boy has been married twice. From his first marriage with Ann Buck, aka Ann Archambault-Buck, he has two daughters, Trudy Buck and Natalie Buck. Then, he exchanged the vows with Michelle Beisner-Buck, with whom he has twin children named Blake Andrew and Wyatt Joseph.

Similarly, Carole Lintzenich’s daughter, Julie Buck, is a successful author. She works at The Big 550 KTRS. In addition, she shares a blissful marital life with Jeff Brooks, with whom she shares three kids, twin kids Jack Brooks and Matt Brooks and Ben Brooks. Carole’s kids with Jack seem to be doing great in their lives and careers.

Carole’s Husband Had Six Kids From His First Marriage.

Jack Buck’s wife, Carole Lintzenich, is his second wife. Before marrying her, he was married to Alyce Larson. The couple had tied the knot in 1948. The former wife and husband were married for over two decades before getting the divorce in 1969. In their 21 years of togetherness, the duo welcomed six children, Jack Buck Jr., Bonnie Buck, Beverley Brennan, Christine Buck, Betsy Buck, and Dan Buck.

Jack Buck’s kids with Alyce must be doing great in their respective professions. Plus, Carole might have a good relationship with her step-kids.

Carole’s Partner Died From A Combination Of Illnesses

Jack Buck and Carole Lintzenich were married from 1969 until his death in 2002. Carole’s husband, Jack, was admitted to St. Louis Barnes-Jewish Hospital on January 3, 2002, to undergo treatment for Parkinson’s disease, lung cancer and to correct intestinal blockage. After staying in the hospital for five months, he breathed his last on June 18, 2002, at the age of 77.

Many fans and followers left flowers at the base of his bust outside Busch Stadium within two hours of his death. Similarly, local television news anchors all wore black suits for several days, also the flags at St. Louis County Government Center and St. Louis City Hall were lowered to half-staff. Before the next baseball game after his death, a public visitation was held with free admissions for all the mourners.

Jack’s death made a massive loss in the sports world. Let’s hope Jack has found peace.