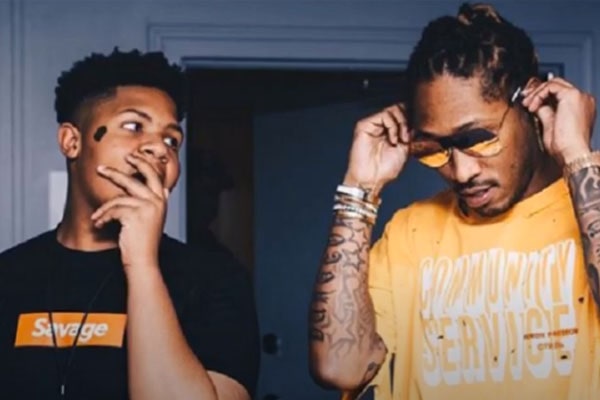 The American rapper, singer, and record producer, Future‘s son Jakobi Wilburn is the eldest among his kids whom he had with his baby mama, Jessica Smith. As of 2020, Jakobi is 17 years old, and he was born in 2002. He, being the eldest of all, has four half-siblings from his daddy’s side. However, Jakobi’s mother has been living a life behind the curtains of the spotlight.

Jakobi Wilburn’s half-siblings are Future Zahir Wilburn, Prince Wilburn, Londyn Wilburn, and Hendrix Wilburn. They all are Future’s children with his other baby mamas. So, here’s what you should know about Future’s son, Jakobi Wilburn.

Recently in Feb 2020, Future’s son, Jakobi Wilburn, became the highlight in the news and media. TMZ mentioned that the kid was allegedly found in possession of a gun with the serial no. scratched on it. He was arrested on charges of criminal gang activity, criminal trespass, and altered ID of a firearm in Georgia. FYI, he could get locked up behind bars for over 20 years because GA tries 17-year-olds as adults. Jakobi apparently listed himself as indigent in court documents with a request of a public defender.

But Future’s not letting his son be put in prison just like that. Complex told that Future reportedly aimed to hire best lawyers possible and cover all the legal fees that come with that. Both of Jakobi’s parents have stepped in to help him. Jessica Smith told TMZ,

“Our son is a minor and to protect his well being in this trying situation, we ask that everyone please respect our privacy at this time”

Nevertheless, one of the BCK Online’s article stated that Jakobi was out of jail.

According to The Jasmine Brand, Future’s baby mama, Jessica Smith apparently demanded an increase in her child support. The reason for doing so appears to be the rapper’s negligence on Jakobi Wilburn, failures as a dad, and his sky-rocketing career.

The article flashbacks about the lawsuit filed against Future in early 2013. It says that she accused him of lying about his true net worth just to low down his child support payments. The rapper was roughly paying $1,662 based on his claim he brought in $16,000 a month from work. However, she said Future had an actual income exceeding $50,000.

Well, the latest rumor says things calmed down between the two until recently when Jessica headed back to the court to sue Future for not being a good dad. Also, it reported that Future failed to maintain a meaningful, loving relationship with Jakobi. Therefore, Future’s son is in need of behavioral and clinical therapy to address the emotional trauma Jakobi has been suffering.

Let’s hope everything will be sorted out soon and we hope the best for Jakobi and his future endeavors.

Jakobi is a name that came from the Latin origin, meaning ‘supplanter; held by the heel.’