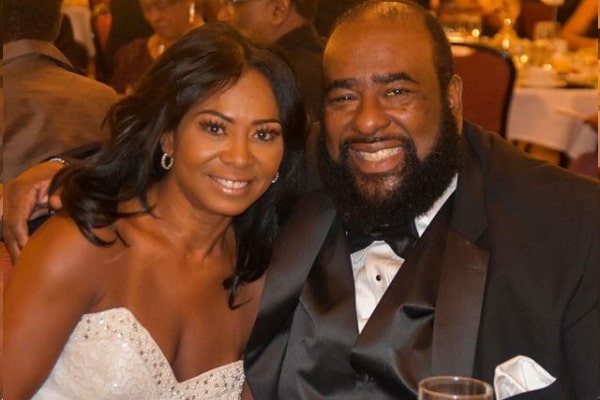 James Brown‘s godly talent as a musician has created wonders in the music industry. In contrast, his unparalleled interests in women have left unresolved predictions of the number of offspring left by him. However, we know that the music mogul was married to four women, Deidre Jenkins being his second wife.

Being James Brown’s wife was not an easy job, primarily because of the fame and domestic abuses that made headlines. Unfortunately, James Brown’s daughters, Deanna Brown and Yamma Brown were scared because of their parent’s tumultuous relationship. However, they did grow up to become successful people with thriving careers.

Therefore, here, we shall tail the tales of James Brown’s daughter, Deanna Brown Thomas, who has been married for a decade now.

Aforementioned, James Brown was married to four women, Deidre Jenkins being his second wife, who unfortunately faced harsh beatings from the music legend. Despite the abuse, the former couple were married for nine years and welcomed two daughters, Deanna Brown being the oldest.

Interestingly, Deanna never spoke up about her parent’s tumultuous relationship. However, as per her sister Yamma Brown’s memoir, she too witnessed her parents’ brawls and was as terrified as her sister. Moreover, she hid in the closet with her younger sibling in an attempt to neglect the noises.

James Brown’s daughter, Deanna Brown, grew up to become a successful composer and pays tribute to her father. Despite the terrible rage, she saw her father in, Yamma assured James never laid hands on the girls. Therefore, we do see that the girls shared a great relationship with their father and both Deanna and Yamma share his pictures with heartwarming captions.

Apart from having the glory of her father’s name, Deanna Brown created her own persona as a radio & television personality, humanitarian, and entrepreneur. In 1994, James Brown named her the Executive VP of James Brown Enterprises. Deanna’s passion lies in communication, and thus she has worked in several broadcasting companies like Clear Channel, CBS Affiliate WRDW, etc.

Furthermore, Deanna also made her career debut on New York Undercover in 2000. Thus, seeing Deanna take over her father, James Brown’s company, and learning music with him shows her close relationship with her father.

Although Deanna’s parents’ marriage was a mess, she enjoys a blissful marital life with her husband. Shawn Thomas.

Been Happily Married To Shawn Thomas For Two Decades

As stated earlier, Deanna Brown Thomas’s parents were in a messy relationship, and she witnessed it. Although it inflicted deep wounds in her, she found the right person, Shawn Thomas. Unfortunately, Deanna Brown Thomas’s husband Shawn prefers to stay away from the limelight, but they sure are in love after decades into marriage.

The couple first met while Deanna Brown Thomas’s partner, Shawn Thomas, worked as her father’s bodyguard. According to Augusta Chronicles, Mr. Shawn Thomas was glad to know his wife more deeply. He was even more drawn when he found out that Deanna was more than just a pretty face.

The proposal was a whole new tale when Shawn’s father-in-law abruptly left the room to use the bathroom. Deanna’s partner waited for him to return, which made him more nervous. Nevertheless, Shawn asked for Deanna’s hand singing O’Jays’ son, and she started crying.

The lovebirds exchanged vows on August 1, 1997, as Jay Jefferies served as her videographer and Bonita was one of the wedding coordinators. The wedding was grand and spectacular when Deanna’s father performed. While speaking to Augusta Chronicles, Deanna revealed that she considers herself lucky as James’ daughters to give away.

Moreover, Jefferies further recalls that James Brown barely sat and just watched the ceremony. Deanna Brown-Thomas and James Brown were very close. He taught her the business, and she accompanied him during his tours.

Apart from being her father’s beloved baby girl, Deanna Brown Thomas also started a business with her husband, Shawn Thomas. While talking about their lasting marriage, James Brown’s daughter believes that encouraging one another is the key to maintaining a family.

Started A Business Together

A couple that works together has a higher probability of a long-lasting relationship. Likewise is the story of Deanna Brown Thomas and her husband, Shawn Thomas.

The Thomas couple started their first venture, T&T Transportation, shortly after their marriage in 2006. Moreover, her husband, Shawn Thomas, bags a few experiences as a restaurant owner as he owned Seafood Palace for almost a decade and co-owned World Ribs and Wings with James Brown.

Apart from their blissful marital life, Deanna Brown Thomas’s beau, Shawn, admits that they have a good relationship working together. He further detailed that he is in charge of day-to-day operations, and his wife takes care of other things. Moreover, he also revealed that when a married couple is in business together, one often finds a niche to make it work.

Shawn Thomas also believes that his wife is a great businesswoman and a great mother.

Apart from having a good relationship in both marriage and business, James Brown’s daughter, Deanna Brown Thomas, is a great mother as well. The pair welcomed a son, Jason Thomas, who she proudly shares all over her Instagram. She also appreciates her baby for making her a mother.

Although her work occupies much of Deanna’s life, she still manages to make time for her family. Moreover, the Thomases have a blended family with Deanna Brown’s son, Jason Thomas, and Shawn’s children, Monique Thomas, Antoine Thomas, and Terrance Thomas.

While talking to Augusta Chronicle, Shawn Thomas said that his wife is the family’s first kind of person. She makes sure there is a family vacation as well as a personal one. Although Deanna is a little strict, she’s caring and a giving spirit.

Thus, James Brown’s daughter, Deanna Brown Thomas, has a successful life, a good husband, and a happy family. She is fulfilled and continues to grow as a person who values her community and entertainment.

The name Deanna has an English origin, which means divine.