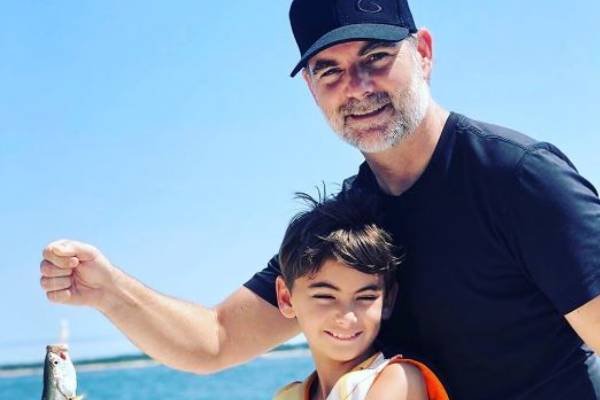 Jeff Gordon, a well-known stock car racing driver, currently serves as the Vice Chairman for Hendrick Motorsports. As a full-time racer, he raced from 1993 to 2015 and drove the No. 24 Chevrolet for Hendrick. He is considered one of the most influential drivers in NASCAR history, and during his professional career, he helped the racing sport reach mainstream popularity.

The successful driver is a doting dad of two children, a boy and a girl. He shares the kids with his lovely wife, Ingrid Vandebosch. Many might be wondering if his babies have already followed in his footsteps. So, in this article, know more about Jeff Gordon’s son, Leo Benjamin Gordon, and see if he is interested in racing.

The Youngest Of The Gordon Clan

As mentioned earlier, Leo is Jeff Gordon’s kid with Ingrid Vandebosch. He was born on August 9, 2010, at 8:53 a.m. on Monday. At the time of his birth, he weighed 7 lbs, 2 oz. Furthermore, Leo Benjamin Gordon’s father shared the news of his arrival on his official website.

In February 2010, Leo’s dad announced about the pregnancy through his website. The couple wanted to be the first to tell that Ingrid was 12 weeks pregnant and they were expecting their second child. The former driver further added that they were very excited and could not wait to expand their family. The following month, the pair revealed it was a baby boy.

As the youngest child of his parents, Leo must be pampered really well. He must be having a splendid time growing up.

Has An Elder Sister

As mentioned earlier, Jeff Gordon’s kid, Leo, is his youngest child with Ingrid. Before his birth, Leo Benjamin Gordon’s sister, Ella Sofia Gordon, had arrived on June 20, 2007, at 9:09 a.m.and weighed 7 lbs, 1 oz. Their father also shared the news on his website. Leo and his sibling must have a wonderful bond.

Moreover, Leo Benjamin Gordon’s parents have been married since November 2006. They met in 2002 at a party and started dating in 2004. It was love at first sight for the duo, and ever since, they have been enjoying their togetherness. After getting married, the couple welcomed Leo and Ella. The happy family of four is living well in the South Park neighborhood of Charlotte, North Carolina.

Has Jeff Gordon’s Son Followed In His Footsteps?

Being born to a renowned racer, many race car fans are curious to know if Leo has got some interest in racing. Well, the former NASCAR racer’s boy got officially certified in February 2018. He raced at the North Carolina Quarter Midget Association Speedway.

In December 2017, Jeff Gordon’s son took his first laps in a quarter midget on the CQMA Speedway. He made a few laps around the speedway and admitted that he did not want it to be over. Leo, who has a similar facial structure to Jeff, might follow in his footsteps. Looking at his racing enthusiasm, will we see him as a pro racer someday?

Since his father is a well-known NASCAR racer with decades of experience, has Leo also gotten some tips from his old man?

Nonetheless, Leo seems to be doing really well. He is living a comfortable life with his parents and sister. Jeff Gordon’s son has traveled to several places with his family. As he is still young, he must be focusing on his education. Let’s hope we get to see the junior Gordon race professionally in the future.

The name Leo, which originated from the Latin word for lion, dates back centuries. In German, the name is a short version of Leon or Leopold, meaning “brave people” or “lion-hearted.” The name Benjamin originated from the Old Testament of the Bible. Furthermore, it has Hebrew origin, which means “son of the right hand.”