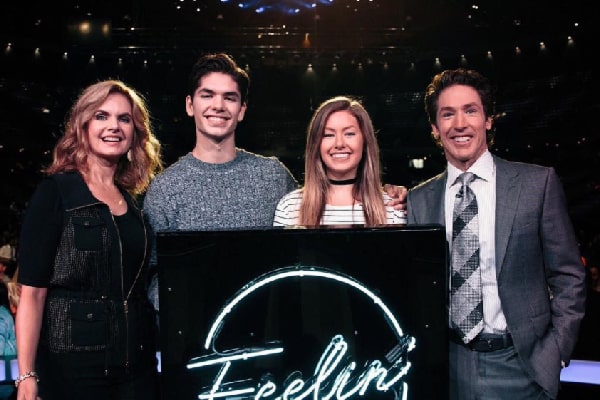 Victoria Osteen is the co-pastor of Lakewood Church in Houston and a successful author. She is famous as the wife and daughter-in-law of Joel Osteen and John Osteen, respectively. The power duo, Joel and Victoria Osteen, have been enjoying a blissful marital life since 1987 and welcomed two beautiful and talented kids together.

Amongst Osteen’s children, their daughter, Alexandra Osteen, is an exceptionally talented singer and performer who shares her interest with her brother, Jonathan Osteen. Since the curiosity regarding Joel and Victoria Osteen’s children has been hyped because of their revolutionary career choice, we have noted every fact on their talented kids, Alexandra and Jonathan.

Victoria Osteen’s daughter, Alexandra Osteen, was born on November 9, 1998, in Texas. The 22-year-old is enjoying a healthy 20s and living an extremely successful life. Born in a performing family, it is only natural that she adopted their skills. Alexandra Osteen is a very talented singer and a part of a band from Lakewood Church. She also accompanies her brother, Jonathan.

Joel Osteen’s daughter, Alexandra Osteen, released an EP in 2019 called In The Name, Vol.1. Also, their song, I’ve Got a Fire has over 150,000 streams on Spotify. Besides, Alexandra also has a remarkable number of followers on social media platforms, including her Instagram. Having almost 51.9k followers, Osteen’s daughter shares moments with her friends and families.

The University of Texas graduate, Alexandra, is charming, has beautiful wavy hair and ocean eyes. The travel enthusiast is a social bee and loves spending time with her friends. Furthermore, during an interview, she revealed that she would rather talk to animals over knowing every language. Perhaps, she would also love to describe herself as an introvert and is very thoughtful.

Despite sharing all the information she posts on Instagram, she still seems single and is yet to find the love of her life. Moreover, Alexandra has an excellent relationship with her parents. They are very supportive of her choices and had a wonderful childhood. Therefore, let’s look at Joel and Victoria Osteen’s son and Alexandra Osteen’s brother, Jonathan Osteen.

Aforementioned, the Osteen couple has welcomed two kids together. Both Alexandra and Jonathan are exceptionally talented people. Both the siblings are a huge fan of music and have always been a part of Lakewood Church their entire life. The firstborn in the Osteen family, Jonathan Osteen has performed at several Lakewood services.

Furthermore, Joel Osteen’s son, Jonathan, has been doing more with the church and might as well follow his father’s footsteps as pastor. During an interview with ABC, he further said that he was always involved with the Church, and it only felt natural to get more involved.

Moreover, Jonathan seems very close to his father and shares interests with him. Besides, he feels thankful as there’s someone to guide the way with all the experience. Jonathan and his father not only bond as a father-son duo but also as a coach and student. Well, it is a blessing to have someone’s experience one can rely on.

Alike Alexandra, Jonathan also introduces himself as an introvert. He revealed that he loves to spend time with his family and play with his dogs. The University of Texas graduate is a humble man with beautiful beliefs. Therefore, we might as well anticipate hearing more of Osteen’s siblings more in the future.

The name Jonathan is of Hebrew origin which means ‘God has given.’ Similarly. Alexandra means Defender Of Mankind and has a Greek origin.