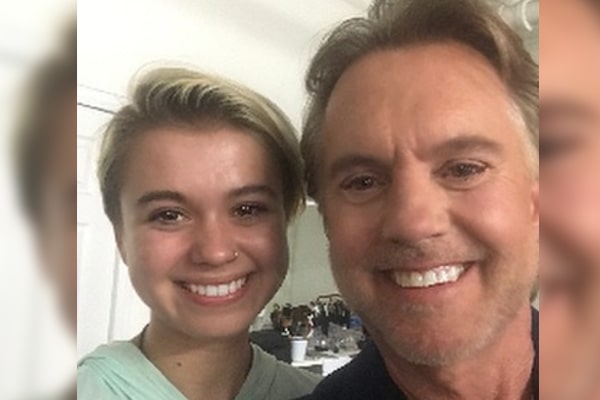 Shaun Cassidy is an accomplished actor, singer, writer, and producer who has made a massive name since 1976. Known for Breaking Away, daily soap, General Hospital, etc. he is also a doted father.

Once Upon a Texas Train actor, Shaun Cassidy’s daughter, Juliet Cassidy, is exceptionally secretive. She has remained away from the media scrutiny since her birth and barely made public appearances. Diol and Cassidy welcomed Juliet on March 19, 1998, and have nurtured her very well.

Juliet Cassidy’s father tweeted a few times about her. However, he rarely uploads her pictures. Interestingly, he has only uploaded a picture once in 2019 and congratulated her on graduating from her high school in 2016.

It looks like Juliet decided to follow her parents’ footsteps. According to her IMDb, she served as an executive director in tv series, Hysteria in 2014.

Furthermore, Juliet wrote and directed Meeting Mr. Wright, and her mother, Susan was very much proud of it. In a nutshell, Shaun Cassidy and Susan Diol’s only child, Juliet, is a very talented young woman who is establishing her name with her talent and hard work.

Despite Shaun Cassidy’s daughter, Juliet’s rise behind the camera, she chose privacy and is unavailable in any form of social media. Let’s hope we will see the name amongst notable fashion photographers in the coming days.

Aforementioned, Juliet Cassidy is the only child of Shaun Cassidy and Susan Diol. The former couple was married on May 7, 1995. However, their eight years of marriage came to an end after welcoming a child.

Succeeding to establish himself as an accomplished writer and producer in his later year of career, Juliet’s father Shaun Cassidy is happily married to Tracey Lynne Turner since 2004 and has four children with her.

Before Susan and Tracey, Shaun was married to actress Ann Pennington for fourteen years from December 1, 1979, to July 4, 1993. The former couple shares two children, Caitlin Cassidy and John Cassidy.

Likewise, Juliet Cassidy’s mother, Susan, was married twice before the American Gothic actor,  Shaun Cassidy. She was previously married to a writer, and producer Jerry Rapp. Likewise, she was also married to director and producer, Andy Cadiff and William Newkirk.

Although Juliet Cassidy’s parents parted ways, the couple nurtured her with love. Actress Susan is a proud mother of one, and Shaun reminisces his daughter’s growth every once in a while via social media.

When my daughter Juliet was a baby, I’d get up every morning with her, lift her from her crib, and carry her into my office to dance. Every morning. Before the sun, before the birds, we’d be dancing. But only to one song: “Thunder Road.” Tonight I know why. #SpringsteenBroadway pic.twitter.com/GCez8cyuNf

Thus, she is loved and must be enjoying her youth in privacy along with her six siblings, Caitlin Cassidy, John Cassidy (Jake), Caleb Cassidy, Roan Cassidy, Lila Cassidy, and Mairin Cassidy.

The name Juliet is of English origin, which means youthful or downy.