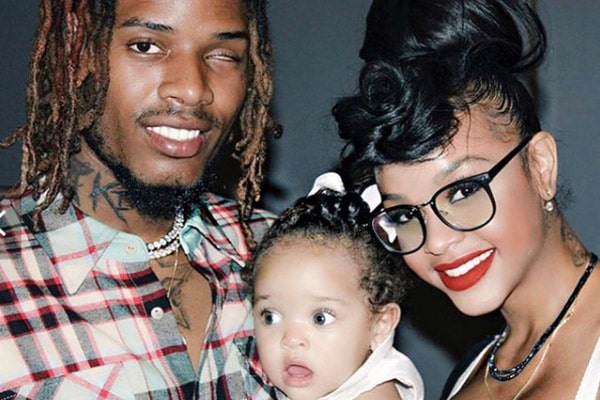 The beautiful Khari Barbie Maxwell is the daughter of the famed Afro-American Singer Fetty Wap with his ex-girlfriend Masika Kalysha. Besides, Khari Barbie, her father, Fetty Wap, has six more children with six different relationships.

Talking about Khari’s parents, Fetty Wap and Masika Kalysha, they are the famous figure of the American Entertainment Industry. Her father, Fetty, is a well-known American Rapper. His rocky voice cuts through trap instrumentals and melodies, creating his honest and aggressive lyrics a staple of New Jersey’s rap scene. As for Khari’s mother, she is the former reality TV star notable for ‘Love & Hip Hop Hollywood.’

Here are some more details about Fetty Wap’s daughter, Khari Barbie Maxwell. So, don’t miss it.

Fetty Wap and his ex-partner Masika welcomed their first child together, Khari Barbie Maxwell, back on 29 March 2016. Khari weighed in 7 lbs 1 oz at the time of her birth at 6:07 am.

Khari has an Instagram page in her name operated by her momma, Masika, and which she created before Khari even stepped into this world. Her Instagram has over 95K followers at present, making her an Instagram Star. Masika often shares her daughter’s photo on the page, which gets more than ten thousand likes every day.

Furthermore, Masika uploads her little princess, Khari’s videos, frequently on her YouTube page as well. Her fans can see her well as she grows, via her mom’s YouTube as well as her Instagram.

Besides, Khari’s mom, Masika, owns a beauty brand in her name ‘Khari Barbie Beauty.’ She often appears alongside her mother as the model of Masika’s designer line of luxury cosmetics.

Khari’s parents, Fetty Wap and Masika, were in a relationship for a short period. Their relationship was always a confusing issue for the public.

Back in 2016, after the birth of Khari, Fetty Wap cleared the media about the puzzlement regarding his and Masika’s affair. He said that they were never in a serious relationship. However, he admitted Khari as his daughter for life.

As there are two edges to every story, it’s a must for the public to know Masika’s version of ‘love story’ too. Masika used her Instagram as a medium to answer the curious minds about Fetty Wap’s role in her life.

When one of Masika’s followers asked if she missed Fetty, she responded with a ‘no.’ Another Insta user asked if Fetty visits her often, then she answered that she could not get rid of him as they share a whole human, their daughter. With all the responses of Khari’s momma in the media, it’s clear that the two are still good friends and co-parenting Khari successfully.

Just some months after the birth of Khari, her parents got into a fierce exchange via social media concerning their daughter.

The feud began in June of 2016 after Fetty Wap shared a snap of then 3-month old Khari on his twitter. The parents of Khari had an agreement not to bring her in the spotlight. But against their decision, the ‘Trap Queen’ Rapper posted his daughter’s photo on his official twitter page.

That was not the only clash that occurred between Khari’s mom and dad. They often argue in and out of the social media sites over their parenting skills.

As mentioned earlier, Khari is the third child among the seven children of Fetty Wap. She has six more half-siblings from her father’s relationship with several women.

The eldest half-brother of Khari is Aydin Maxwell, whom her papa, Fetty, had with his ex-partner Ariel Reese. The second is half-sister Zaviera Maxwell, welcomed by Fetty Wap with his short dating Lezhae Zeona. Also, the estranged couple, Lezhae and Fetty, have another child together, a son, but his name is not available for the public yet.

The remaining three half-siblings of Khari are Alaiya Maxwell, Amani Maxwell, and Lauren Maxwell. Alaiya is the daughter of the Rapper with model Alexis Sky. Furthermore, Khari’s father gave birth to Amani with Elaynna Parker and Lauren with an exotic dancer, Turquoise Miami.

Unfortunately, Fetty Wap’s daughter, Lauren Maxwell died at the young age of four in late June 2021. News bout her death swirled around via social media but both Fetty and Turquoise are yet to talk about their loss. Thus, let’s hope the grieving parents are doing well and the late soul rests in peace.

The African name Khari’s meaning is queenly and joyful.