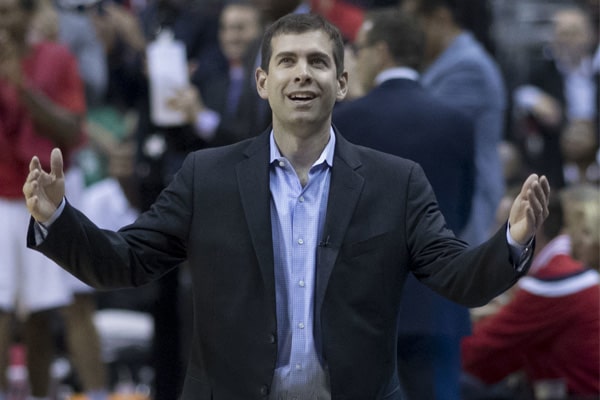 NBA coach Brad Stevens is known for his motion offense and stingy defense, which have earned praise from fans, peers, and players. While his basketball game has been top of the line, many fans are curious to know how the fierce coach handles his personal life.

Brad has been married to his wife, Tracy Wilhelmy Stevens, for more than a decade. The couple has been incredibly successful in making things stay with them as wonderful as they were. Moreover, the couple is parents to two wonderful children, which makes it more appealing. With that in regard, we have gathered some incredible information about Brad Stevens’s daughter Kinsley Stevens which may surprise you.

Kinsley Stevens Is The Second Child of Brad and Tracy

Well, Brad and Tracy have two wonderful children in the form of Brady Stevens and Kinsley Stevens. Born in 2010, Brad’s ten years old daughter Kinsley is his second child. From sharing wonderful moments together to always have time for family, Kinsley and Brad share a lot of time together.

Kinsley is also getting brotherly love from her brother Brady Stevens who loves her like nobody else. Kinsley sure is lucky to have Brad and Tracy as her parents and Brady as her brother. We are bound to see a lot of brother-sister moments between these two siblings in the coming days.

Brad Stevens Has Written A Letter For His Daughter

Kinsley’s father game went up by a mile when he wrote a letter for the Leaders and Daughters Event series. The 44-year-old coach wrote a touching letter with a suggestion for his daughter to be a great teammate. The tactical genius had mentioned all the valuable aspects that are necessary for a great team player. Moreover, he added that family, friends, and mates from school all were important teammates in life.

Brad Stevens’ daughter Kinsley is part of the theatre group, soccer teammates, and many more. Brad mentioned that all of these groups were her team and advised her she stay good with everyone. Although Brad was worried about how to write a letter to a nine-year-old, he went and did it anyway, and it turned out to be amazing.

Kinsley and Brad Have Shared A Lot Of Wholesome Moments

Like every father and daughter, Kinsley and Brad share a lot of wholesome moments with each other. For instance: in a routine press conference after the Celtics’ win over Atlanta Hawks in the recent NBA season, Kinsley asked her father an unanswerable question. She asked her father who his favorite child was among the two siblings. As expected, Brad answered that he loved both of his children equally. Although short, this was a wholesome moment the two shared.

Kinsley seems to be inspired by her father. As her father continues to be a role model for her, we will certainly get more of these father-daughter moments in the near future.

The precious bond between Brad and Kinsley was even more evident in an NBA match between the Celtics and Pistons back in December 2019. The little nine-year-old had one advice for her dad: to put the Celtics’ player Tacko Fall in the match after a massive chant from the crowd demanding the same.

Whether it was Brad Stevens’s daughter’s request or his own decision to put Tacko in the game, it worked in their favor as the Celtics won the game 114-93. Taco ended the game with five points under his name. This was one of many beautiful yet surprising moments Brad has shared with his daughter, and let’s hope we get to see more of these in the coming days.

Kinsley is an English medieval surname originating from a place named Kyneslay. The meaning of the word Kinsley is ‘king’s meadow’ or ‘royal wood clearing.’