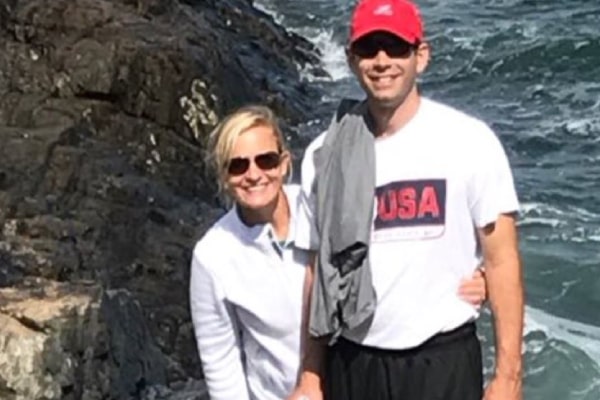 This 44 years old coach started his journey as a high school basketball team player. After that, he joined the varsity basketball team as players and later on as a team coach. Like it’s said, ‘Succes doesn’t come easy,’ Brad had to work for 13 years and prove himself as one of the best coaches before entering the NBA.

Coach Brad is known for his motion offense and a stingy defense. But enough about him, since we all have heard a lot about this emerging coach, let’s talk about his life partner/wife, Tracy. We are about to dive deep into the personal life of Brad Stevens’ Wife, Tracy, so stick to the end of this article to know about this amazing lady.

Who is Brad Stevens’ Wife, Tracy?

It took twenty years for Brad to reach this height, and one person who made it easier for him to climb is his wife, Tracy Wilhelmy Stevens. The couple has been together for more than two decades, and yet the spark in their relationship is only getting brighter and brighter. Tracy has helped him not only emotionally but also professionally.

Let’s take a ride around the life of this wonderful woman.

How Did The Couple Meet And The Wedding

The now-married pair, Brad and Tracy met at DePauw University, Greencastle, Indiana, during their freshman year. Tracy played on the school’s soccer team and was the captain of the senior team. The love for sports was what initially brought them closer. They both graduated in 1999 and are together ever since. Unfortunately, they had been through ups and downs, but one thing always remained constant- their love and support for one another. This bond between them led them to their marriage in August 2003.

They Have Two Children Together

Now, Brad and Tracy are happily married for 17 years with two children- one daughter and one son. The couple welcomed their first child (son) Brady Stevens in 2006 and their second child (daughter) Kinsley Stevens in 2009.

Tracy Has A Law Degree and Previously Worked As An Attorney

During his struggling period, Brad had to work as a volunteer at Butler University and leave his previous job. Tracy was very supportive, although things would get more challenging for them. On being asked about this, she said, ” That’s the only time I ever questioned it. It was so obvious to me that this was his passion, and this was going to make him happy. And then that was the end of it. I loved him.”

Since Brad was not earning anymore, Brad’s wife Tracy decided to go back to school to pursue a law degree in order to support him financially. She graduated from Case Western Reserve University School of Law in Cleveland with a specialization in contract and labor law. She worked at Bingham Greenebaum Doll LLP. based in Indianapolis.

But, she had to put a pause on her career after the birth of their daughter Kinsley. After that, even if Tracy’s clients did not benefit from her expertise but Brad did.

After years of hard work, Brad finally got his big break as the head coach of Boston Celtics. And during the negotiation, Tracy’s degree came out to be a blessing in disguise. It was exactly what Brad needed. Brad used a group of people to do his speaking and marketing deals while Tracy worked on his contracts.

Tracy Is A Strong Woman

From the aforementioned things about Tracy, one might have already guessed how strong of a woman she is. But here are a few things to further support the argument.

When Tracy decided to attend law school, her mother had been diagnosed with cancer. She couldn’t leave her mother alone, so spent most of her time at the weekend with her mother.

For two years, she made a five-hour drive to Indianapolis to see Brad. Both Tracy and Brad had their priorities sorted, and maybe this is what built a strong foundation for their eternal love.

Unfortunately, Tracy’s mother died in 2004; only a few months after her marriage with Brad.

Later, Brad and Tracy got involved in the American Cancer Society’s Coaches VS Cancer program. This organization empowers collegiate teams to help fund and run awareness campaigns for cancer research. In addition to that, the couple has also volunteered for the Jukes Foundation for Kids. Tracy also serves as an advisor of the Greater Boston Food Bank.

Had it not been Tracy, it would have been pretty tough for Brad to manage his work-life. To date, they have complemented each other very well, and we hope that they continue to do so forever.