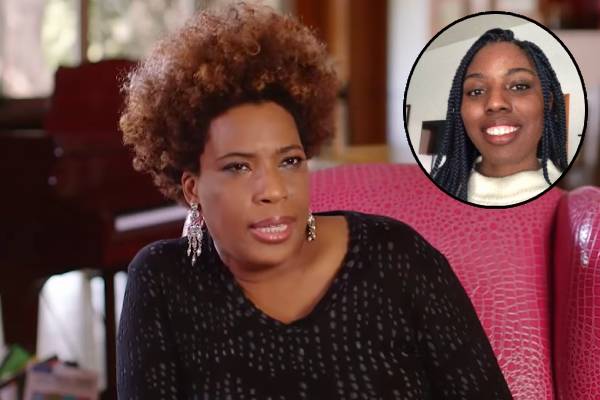 Natalie Renee Mclntyre, aka Macy Gray, is a renowned R&B singer and actress of American nationality. The soul singer is also famous for her distinctive, raspy voice and singing style, profoundly influenced by Billie Holiday, aka Lady Day. She has been active in the music industry for over three decades and has garnered a lot of fame.

Talking about her personal life, the prominent singer is a proud mother of three kids whom she shares with her ex-spouse, Tracey Hinds. During the 1990s, Macy Gray’s ex-husband was a mortgage broker. The musician once revealed that the coolest people she knew were her kids. So, today, let’s learn more about her adorable child, Aanisah Hinds.

Is The First Child Of Her Parents

Macy Gray’s daughter, Aanisah Hinds, was born in January 1995 as the first kid to her and her then-hubby. Her parents tied the knot back in the 1990s. Moreover, her younger brother, Tahmel Hinds, arrived in December of the same year. Afterward, her little sister, Happy Hinds, was born as the youngest baby in 1997.

Additionally, Aanisah’s parents ended their marriage when her mother was pregnant with her sister, Happy. The Hinds siblings might have been affected by the divorce of their mom and dad. Hopefully, they shared a close bond with their father.

Is A Graduate Of Pratt Institute

Macy Gray’s daughter completed her formal education at Beverly Hills High School. There, she focused on visual and performing arts and graduated in 2012. Moreover, the gorgeous lady also played volleyball during her high school days. The singer’s baby seems to have loved art ever since her childhood. As a result, she attended Vision Art & Design Portfolio School in the early 2010s to sharpen her skills.

Afterward, Aanisah attended Pratt Institute in 2012 and graduated with a bachelor’s degree in fine arts. In addition, she was also involved in the institute’s volleyball team.

Macy Gray’s Daughter Is An Artist

After earning a degree in visual art and painting, the musician’s baby girl started her professional career as a freelance artist or graphic designer in 2008. She has since established herself as one of the best artists. Currently, she works at several places. For instance, Aanisah is a graphic designer at Bobby Brown Foods, a production assistant at Propagate Content and Silver Screen Pictures, and a receptionist/runner at Windmark Recording.

Before landing her job as an artist and graphic designer, the beautiful girl worked as a receptionist and sales associate. Also, she interned at Lightbox Studios (Giuliano Bekor) for about five months and at LSO Designs for over a year. Apart from that, the talented artist has her own website, Ash Creative. She also serves as a full-time graphic designer at Brown Ribbon Entertainment Inc.

Macy Gray’s little girl must earn a hefty sum as a skilled graphic designer and an artist. As reported by Salary.com, a graphic designer earns an average of $56,296 per annum. Thus, Aanisah’s salary must also be around that range. On the other hand, her mother, Macy Gray’s net worth is $12 million. Thus, Aanisah and her siblings must have lived comfortable lives thanks to their mama’s fortune.

Besides, the Pratt graduate seems to be focusing on her career, and it is not confirmed if she is in a relationship or not.

Macy Gray’s children are huge fans of her music. In an interview, she revealed that one time when the whole family was in the car, one of her songs came on, and the Hinds bunch sang along. They didn’t miss a single word. The incident stunned the famous songstress.

Of course, with the top-rated tunes like Sweet Baby, I Try, and Why Didn’t You Call Me under her belt, it is no surprise that Aanisah and her siblings know their mama’s song lyrics. Their mother also praised them as ambitious and good people.

Nonetheless, Macy Gray’s daughter has grown up to be an amazing adult. She has achieved her dream and is doing well in her professional career. In addition, the beautiful girl has a loving family, including her mama and younger siblings. We wish Aanisah Hinds more success and happiness in her life ahead.

An Arabic name Aanisah is a girl’s name that means Good-Natured.