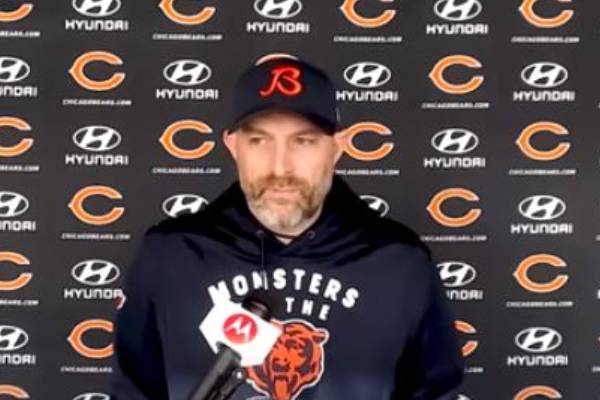 Matthew Nagy, also known as Matt Nagy, is one of the most famous names in the NFL world. He is the former head coach of the NFL team Chicago Bears. He also played in the quarterback position of the arena football. Moreover, Matt started playing college football at the University of Delaware, and he seems to have gained considerable fame and fortune to his name.

While Matt has been very open about his career and success, very little is known about his personal life. The Bears’ coach has been married for a long time now, and he has four kids with his wife. And NFL fans are interested to know about his children. Thus, in this article, let’s learn in detail about Matt Nagy’s sons and how they are growing up.

Matt Nagy’s Children With His Wife

The Chicago Bears coach shares a blissful marital life with Stacey Nagy. The couple met for the first time at the Manheim Central High School. The high-school sweethearts dated for many years, and in 2002, they exchanged the vows. In almost two decades of togetherness, Matt and Stacey became the parents of four kids.

Matt Nagy‘s son, Brayden Nagy, is his eldest child, whom he and his wife welcomed in 2004. Similarly, in 2006, Matt’s wife gave birth to their second son, Tate Nagy. Finally, in August 2011, his twin kids, Jaxon Nagy and Tate Nagy, were born.

In an interview, the father of four revealed that he and his wife had tried for a daughter after welcoming two sons. But the Nagy couple were again blessed with twin boys.

The Nagy family are doing great for themselves and are living a wonderful life. Matt Nagy’s children are also having a great time growing up together.

Children of any sports personalities following in their footsteps is not a new thing. They get exposed to the sports world at a young age and later follow in the path of their parents. Just like that, Matt Nagy’s kids also seem to be following in his footsteps.

Similarly, the kids also run routes with the Chicago Bears players and their father. The boys also attend the press conference with their parents. When their dad was named the Bears’ 16th coach, they were also present.

It is unknown if the twins play football like their elder brothers. But if the boys plan on playing football professionally, their dad will undoubtedly guide them to be one of the best players. Let’s hope Matt Nagy’s children succeed in whatever career path they choose.

“Fire Nagy” Chant Broke Out During One Of Brayden’s Games

At the same time, Matt’s NFL team, Chicago Bears were also playing poorly and were unable to win their games. As a result, during that game, chants of “Fire Nagy” were clearly heard. While the chants had been heard in numerous NFL games this was the first time of school-level games.

As per a Twitter user, the chants started as early as the second quarter and continued to the fourth quarter. Videos of the incident have also been circling around various social media platforms for a while.

Pulled this from NFHS. Was late in 4th quarter. pic.twitter.com/RRQHDV4gOf

Later, Neil Lesinski, the principal of Cary-Grove, issued an apology letter to Lake Forest. The letter said the chant was not appropriate nor acceptable, and the administration immediately addressed it at the game. Furthermore, many sports personalities stated the behavior to be unacceptable.

While talking with Chicago Suntimes, Brayden Nagy’s dad, Matt revealed that he was a budding golf nut. He is also the responsible, caring “caretaker.” Moreover, Brayden’s dad mentioned that during one of the offseasons, he was invited by Jim Nantz, a popular sportscaster, into Butler Cabin. Because of that, Matt Nagy’s son got to see what it was like to play golf at the highest level.

On the other hand, Matt’s son, Tate, is a competitive introvert who prefers to use silences to observe the surroundings. Also, Matt has stated that one of his twin sons, Jaxon, has zero filters. As a result, the little one keeps him and his wife on their toes. Similarly, Jett is the jokester, and his dad, Matt believes he might end up on “The Voice” or “American Idol.”

Matt Nagy’s children seem to be doing great for themselves. Plus, we hope they have a successful future.

The name Jaxon has an American origin, and it means Son Of Jack.

The name Brayden has an American origin, and it means Son of Bradan.

Tate has an English origin, and it means Cheerful.

The name Jett has an English origin, and it means Jet Black.