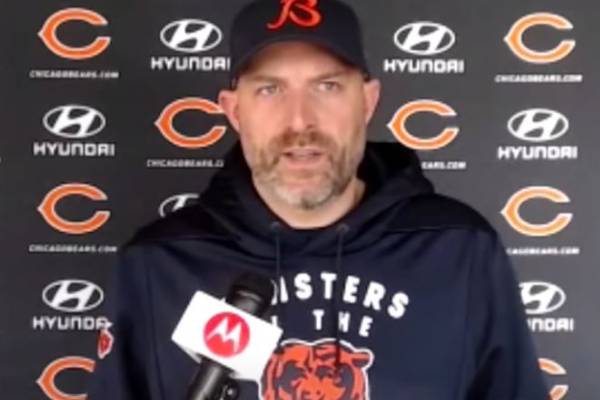 Along with his career in football, Matt Nagy has also worked in real estate field. Image Source: Social Media.

Matthew Nagy, also known as Matt Nagy, is the former head coach of the Chicago Bears of the National Football League (NFL). Moreover, he previously was an arena football quarterback and played college football for the University of Delaware. He spent six seasons in Arena Football League playing for different teams, including the New York Dragons, Carolina Cobras, Columbus Destroyers, and Georgia Force.

In his professional career, Matt has gained immense fame and popularity globally. Many of the NFL fans are familiar with him, and they often are curious about how much the coach has amassed to his name. The questions like how much wealth Matt has accumulated and what are his income sources do not leave his back. Thus, in this article, let’s discuss in detail about Matt Nagy’s net worth and earning details.

Matt Nagy Net Worth And Earnings

The NFL coach, Matt Nagy, played football at a very young age, and by the time he was a youth, he was involved in football. He had a successful high school and college career, and since then, he has gained success at his work. Talking about his earnings, in all these years of being involved with the NFL, there’s no doubt that the coach has amassed quite a fortune.

Although the actual amount has not been revealed yet, it is safe to assume that Matt Nagy’s net worth might be in millions. Most of the wealth that he has amassed comes from the salary and contract that he has signed. So, let’s learn about his income sources.

Matt used to play high school basketball and football for Manheim Central High School. He played football as the starting quarterback and had a successful high school career. He joined the University of Delaware and played for the Delaware Fightin’ Blue Hens for three years, from 1997 to 2000.

Matt ended his college career with 58 touchdown passes, 8,214 passing yards, and a rating of 146.74, and all these were considered the best in the team history. He did not get selected in the 2001 NFL draft despite his exemplary college records. Instead, in 2002, he debuted in the Arena Football League with New York Dragons. However, he played for only a season with the team.

Then the Dragons traded Nagy to the Carolina Cobras in November 2003 for Tim McGill. With that team, too, he played only a year and signed a one-year deal with the Georgia Force on October 27, 2004. But in August 2006, the Force traded him to the Columbus Destroyers for Mike Sutton. He ended his two-year tenure with the team as its record holder. He played with the team for the 2007 and 2008 seasons until ending his playing career after the league folded due to the Great Recession in 2008.

According to Fox Sports, an AFL player’s average salary in 2020 was $259,651. So, Matt Nagy’s earnings might have been around the same range. As a result, he must have earned considerably over the years.

Also Read: Learn About Roger Goodell’s Net Worth And Earnings

Even though his playing career ended in 2008, Matt became involved in the sport as a coach. During the 2008 NFL offseason, he interned with the Philadelphia Eagles and was offered $45,000 per year for the position. He stayed with the team for the 2009 season. In 2010, he was hired for a full-time job with the team as the head coach, Andy Reid‘s assistant. In 2011, he became a quality control coach of the group.

In 2018, Matt replaced John Fox to be the head coach of the Chicago Bears. He became the sixteenth head coach in the team’s history after signing a five-year contract with the team. According to NZHerald, he earns $7 million per year as the head coach.

According to Chicago Suntimes, January 2022 is reportedly his last season as the head coach of the Chicago Bears. As the team suffered more losses, including the one with Green Bay Packers in the 2021 season, it has been speculated that Matt will not return as a coach for the Bears after this season.

Sadly, the speculation came true as the Bears fired Matt Nagy on January 10, 2022. It is not known which team he will be joining next, but let’s hope he can win the NFL champion with his future team.

Nevertheless, in his five years as a coach, Matt seems to have earned a considerable sum. As a result, Matt Nagy’s net worth has undoubtedly increased over the years.

Has Earned Significantly As A Real Estate Agent

After Matt’s playing career ended, he worked in real estate. It has been reported that he earned $100,000 a year by selling homes. He worked for the Keystone Custom Homes operation. In 2009, Nagy successfully represented the company on the sales floor after managing to sell six homes during the worst real estate slumps in 50 years. He left the company after he was called to intern for Eagles.

Matt must have earned significantly while working for the company. Thus, seeing his earnings from coaching and other ventures, Matt Nagy’s massive fortune seems plausible.

As mentioned earlier, Matt Nagy’s wealth might be in millions. And with such a massive amount of riches, there’s no doubt that the NFL coach lives a comfortable life with his family. He resides with his wife, Stacey Nagy, and four kids in Illinois.

Nonetheless, let’s hope Matt earns significantly over the years so that he continues to live a comfortable life in the future.