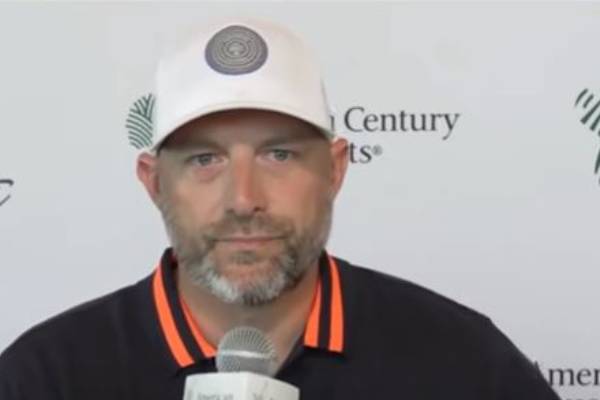 Matt Nagy first found fame as an Arena Football League quarterback. He played for New York Dragons, Carolina Cobras, and Georgia Force, among others. He started his coaching career in 2008 and has since worked for several NFL teams, including the Philadelphia Eagles.

Thanks to his surprising success as an NFL coach, Matt Nagy became a talk of the town. After Matt was announced as the head coach for Chicago Bears in 2018, his spouse and children caught people’s eye. Nonetheless, the Nagy family has managed to avoid public scrutiny and keep much of their life to themselves.

So, today let’s take a look into the life of Matt Nagy’s wife, Stacey Nagy and learn about their love life.

Those aware of Matt Nagy‘s career as a footballer know that the former Arena football player first caught people’s eyes as the starting quarterback for the Manheim Central High School’s football team. He was known for his on-field confidence and is considered one of the best to come out of Manheim.

But football accolades were not the only thing Matt achieved as a high school student, as he found the love of his life there. He first saw Stacey Nagy, a popular senior, when he was a self-proclaimed skinny little sophomore at Manheim Central.

Matt was infatuated with Stacey, who at the time was dating the star running back of the high school football team. But this did not stop the quarterback, and he managed to secure a date after dropping hints of affection through mutual friends. This was in 1994, and not long after their first date at a basketball game, Matt fell in love.

The Nagy couple attended different colleges, and their relationship was made even more complicated due to their age difference. Nonetheless, Matt and Stacey’s love for each other won the adversities. They eventually got married in 2002.

It took a lot of communication and hard work to keep their relationship afloat in the earlier days. But after almost three decades together, it is clear that Matt Nagy and his wife, Stacey Nagy, have triumphed. The pair are now enjoying their life as a married duo.

Not only is Stacey Matt Nagy’s wife of twenty years, but she is also a mother of four kids. The couple welcomed two boys, Brayden Nagy and Tate Nagy when Matt was still playing in the arena football league.

As per the Chicago Bears coach, the pair then tried for a girl but were blessed with twin boys. Stacey Nagy and Matt Nagy’s sons, Jett Nagy and Jaxon Nagy, are fraternal twins. They were born sometime after the former quarterback retired from his playing career.

While the former AFL quarterback joked about wanting to welcome a girl into their family, the love Matt and Stacey have for their four boys is no less. They raise the children in a loving household and provide them with the guidance and support they need.

Nonetheless, the burden of being a celebrity kid was faced by Stacey and Matt Nagy’s eldest son, Brayden, a quarterback for Lake Forest High School. While he was playing against the football team of Cary-Grove HS, students of the opposing team started chanting “Fire Nagy.” Cary-Grove’s principal immediately issued a statement apologizing on behalf of the student.

Below is a statement regarding the recent Cary-Grove vs. Lake Forest 6A high school football game: pic.twitter.com/cUjUfJduDk

This incident occurred in a November 2021 game after the Chicago Bears were not performing as expected by fans. While the “Fire Nagy” chants were heard during NFL games, the sentiment crossed a line when it was heard during a high school football game.

Despite Matt and Stacey’s efforts to keep their kids away from the shadow of the NFL coach’s career, it seems to have crept up in their boys’ lives. Nevertheless, we hope this is an isolated incident, and Matt Nagy’s children won’t have to be in a similar situation again.

Matt Nagy’s spouse served as the girl’s track coach for Cedar Crest High School. She also supported the family by working as a health and physical education teacher while Matt was between jobs.

Not only this, but Stacey has also been the biggest support system for Matt. She was by his side when Matt was unsure about what he wanted to do after retiring from football in 2008. He later got his real-estate license and worked in the field for some time. He reportedly earned around $100K per year in the process.

But Nagy left the high-paying job to accept an entry-level coaching position with Philadelphia Eagles. Stacey was by her husband’s side throughout this all, encouraging him to do the right thing.

Since their first date in 1994, Matt Nagy’s partner has been by his side, celebrating his success and supporting him through hard days. But Matt is now a successful NFL coach, and Stacey is undoubtedly proud of her husband. Moreover, Matt does not fail to credit his wife for her understanding nature and unconditional support.

While we know that Stacey is supportive of her husband’s career, it is unclear if she is still actively working or has left her job. Whatever she may be doing now professionally, we hope Matt Nagy’s wife is living her life to the fullest.