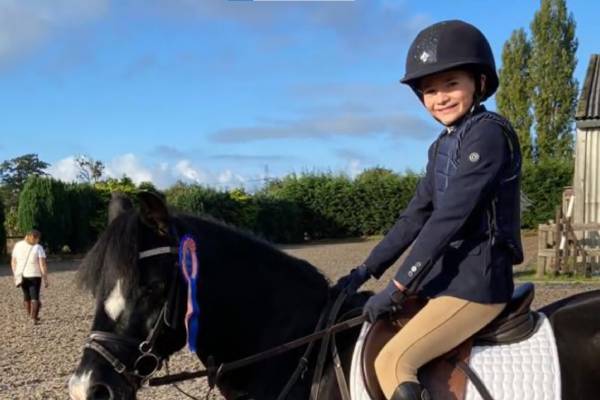 Michael James Owen, shortly, Michael Owen is a former soccer player. He was a striker for famous soccer clubs, including Liverpool, Real Madrid, Newcastle United, Manchester United, and many others. During his career stretching over three decades, he has garnered a lot of fame and name in the industry. After retiring in 2013, the former striker is now a racehorse breeder and owner.

As a sports pundit and commenter, the former player still makes a lot of appearances in media. Talking about his personal life, he is a married man with four kids. Well, today’s article is about one of his children. So, without further ado let’s learn about Michael Owen’s daughter, Jessica Owen.

Is The Youngest Child Of The Family

Jessica Owen was born in February 2010 to her parents, Michael Owen and Louise Bonsall. She is the youngest baby of the Owen family, so she must have grown up with all the love and care from her family members. Moreover, the adorable little girl has three elder siblings, Gemma Rose Owen, James Michael Owen, and Emily May Owen.

Jessica’s mom is a passionate horse rider. Her parents met each other at primary school in 1984 and married in 2005. Both have been together ever since. On the other hand, Jessica’s elder sister, Gemma, is an international dressage rider. Similarly, Emily is a runner who won the 2022 North Of England U15 60m Sprint Championship.

Furthermore, Jessica Owen’s brother, James Michael Owen, is handsome and resembles their dad. He has Stargardt disease that causes spontaneous degeneration of the retina. Nevertheless, he is a bright person who spends a lot of quality time with his family.

The youngest Owen is beautiful, and she resembles her mom with her long blonde hair. Not only that, but she seems to have inherited the passion for horse riding from her mother as well. Although Jessica is still young, she has already started practicing horse riding. The former soccer player recently shared a picture of his child during her practice session on his social media. He even praised his lovely girl for doing well.

While the eldest is away, the youngest is loving life competing on her pride and joy, Jigsaw 🧩 pic.twitter.com/v4RHbPBn8C

The Owen family often travels to different places and spends a lot of time together. Their vacation trips often include going to beaches, different countries, etc. As the beloved daughter is growing up in such a warm environment, she will indeed become an amazing person in the future.

Moreover, Jessica’s dad never misses wishing her a happy birthday. Michael is very supportive of his kid’s careers and choices. Jessica is a lucky girl to be born to such loving parents. Nonetheless, she is enjoying her childhood to the fullest, surrounded by all the love of her mom, dad, and siblings.

Michael Owen’s daughter has her own YouTube channel where she posts videos of spending time with her pony Flash. In October 2021, the adorable girl posted a video about her after-school routine with her lovely pony. In another video, she looked cool riding Flash and showing her skills.

Thanks to her mother and father being racehorse breeders and owners, Jessica can easily practice riding horses. In addition, her professional rider mom must also help her during her practices. Will we see Jessica as a professional horse rider in the future? Nonetheless, Michael Owen’s daughter is enjoying her life to the fullest, getting all the love and attention. We wish the youngest Owen a happy life and a successful career ahead.

Jessica came from the Hebrew word Iscah, which means Vision or Sight. Thus, the name means To Behold or God Beholds or to See Before.