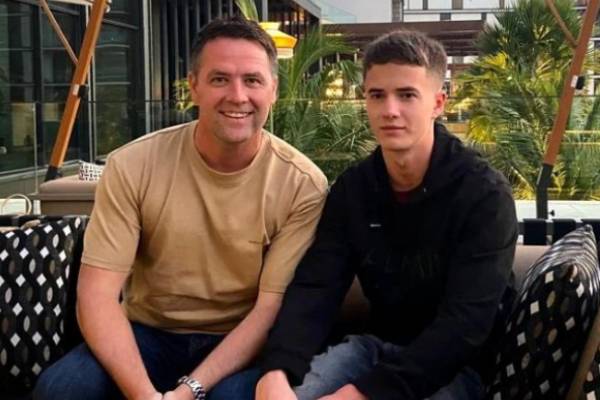 Michael James Owen, shortly, Michael Owen is an English professional soccer player who was a striker for Liverpool, Real Madrid, Newcastle United, Manchester United, Stoke City, and England’s National team. The son of former soccer legend Terry Owen, he was considered one of the most talented figures. During his rocking career, he accumulated immense fame and fortune.

Owing to his reputation and fame, his personal life has become the subject of public interest. Well, the former player is a married man with four kids whom he shares with his beautiful wife, Louise Bonsall. Thus, today let’s get to know Michael Owen’s son, James Michael Owen, in this article. Follow us till the end to know more about his beloved child’s eye condition.

James Michael Owen was born in February 2006 as the second child of his parents. He has a bunch of siblings. Before him, his father and mother welcomed his elder sister, Gemma Rose, in 2003. Additionally, he has two younger sisters, Emily May Owen and Jessica Owen, who were born in 2007 and 2010, respectively.

Furthermore, the Owen siblings’ parents met at primary school in 1984. Ever since then, the couple has been together. The lovebirds got engaged in early 2004 and walked down the aisle in June 2005.

Moreover, James Michael’s elder sister is an international dressage rider for England. Gemma is following in her mother’s footsteps and also won a CDI Lier Ponies trophy in freestyle in 2017. Moreover, Michael Owen’s daughter is a 2022 Love Island contestant. On the other hand, his younger girls seem to be focusing on their education for now.

Owen’s only son has a rare eye disease called Stargardt disease, a condition that causes a degeneration of the retina. This means James’ retina will continue to degenerate slowly and lose complete sight in the future. At first, his doting father was quiet about it as he was avoiding big headlines. But in 2019, the former striker opened up about it in an interview with The Times.

By the age of 10, Michael was sure that he would pursue his career in the sport. Later, he became one of the most accomplished soccer players. As a result, people always wondered and questioned whether his son would also follow in his footsteps. He also often heard people commenting how his boy was not as good as him. Initially, James’ father also used to get annoyed by his positioning.

Furthermore, Michael Owen’s son can’t see the ball until it is five yards away. It must have been painful for him and his spouse to hear such unpleasant news about him. The former player further added that James would never be a professional soccer player.

Has A Lovely Bond With His Father

The handsome son resembles his famous dad. His parents lovingly refer to him as Jimmy. In addition, the father-son duo shares a very close bond. They spend a lot of quality time together. On top of that, the former soccer player never misses wishing his little man on his birthday. They also travel to different places with other family members.

Moreover, the former Liverpool athlete’s child is active on Instagram. He only shares pictures together with his family members, including his sisters, mother, and father. He has grown up and seems to be focusing on his education. Besides, Owen’s only son seems to be single. Or maybe he is in a relationship but has not revealed anything on social media. Nevertheless, the person who will be James Michael Owen’s girlfriend will be a lucky girl.

Nonetheless, Terry Owen’s grandson lives happily with his parents and three beautiful sisters. Michael Owen’s son may not become a professional soccer player in the future. Still, we hope he will achieve a lot of other great things in his life. We wish James Michael a healthy and happy life ahead.

James is the name that came from the Hebrew word Jacob which means Supplanter or Substitute. On the other hand, Michael is of Hebrew origin, which means Gift from God.