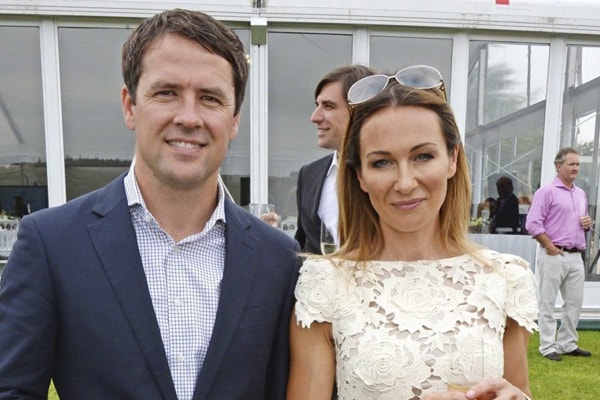 England footballer Micheal Owen’s wife, Louise Bonsall is a trainer for rehabilitated racehorses and shares racing passion with her husband. The stunning and modest, Bonsall has spoken out in her capacity as patron of the Thoroughbred Rehabilitation Centre in Halton, Lancashire in order to draw attention to the plight of horses.

The childhood sweethearts, Owen and Bonsall, walked down the aisle in the year 2005. Likewise, the England striker and his wife, Louise have four adorable children together– Gemma Rose, James Michael, Emily May, and Jessica.

The passionate horse-rider, Louise Owen, is not a stereotypical WAG and has a passion for rescuing horses. Owen’s soulmate, Louise, has an intense love for horses and had her first horse, a Welsh cob called Rolo at 14. Despite having life-threatening accidents a couple of times, Bonsall’s priorities include her family first and her horses second.

Owen and her husband, Micheal guard their privacy fiercely. The racehorse breeder and owner, Louise has never before given an interview. Lousie started riding horses when she was about seven. Lousie’s passion for horses grew when Louise and her brother, Andrew spent their weekend at the riding school exercising her friends’ horses for them. However, the devoted mother gave up her horseriding passion during her times of pregnancy.

The footie ace Michael Owen and his childhood sweetheart Lousie Bonsall exchanged their engagement rings on 14 February 2004. Likewise, the lovebirds walked down the aisle on 24 June 2005. Owen and Bonsall celebrated their union at their Flintshire mansion followed by a lavish reception, after making their vows at a low-key civil ceremony. The romantic pair went to great lengths to keep details of the ceremony under wraps. Michael booked multiple dates of their wedding at several different venues to throw the media off the scent.

Together forever but married 13 years today. Words can’t describe my feelings towards her.❤

Among those congratulating the romantic couple were Michael’s fellow England players- David James and Jamie Carragher. However, his Real Madrid team-mate David Beckham was unable to make it.

The English former footballer, Michael Owen shares four kids with his stunning equestrian wife, Louise Bonsall. The siblings, Jessica, Gemma Rose, Emily May, and James Michael have a strong love for one another and are inseparable. Louise and Micheal share an extravagant £1.6million mansion in Northop with children- Gemma Rose, James Michael, Emily May, and Jessica. The proud parents of four, have an incredible bond with the kids and are not reluctant to flaunt their babies on their social media.