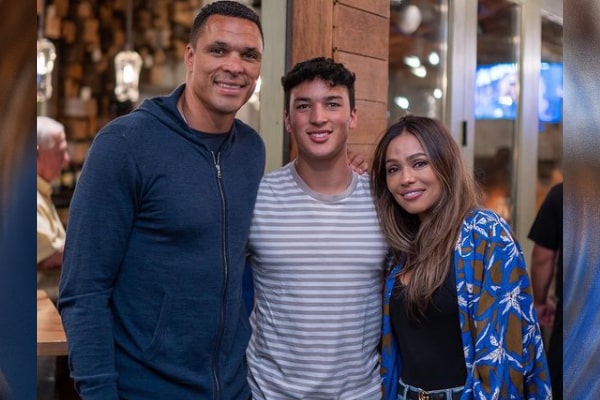 Anthony David Gonzalez, professionally known as Tony Gonzalez, is a former pro-football tight end who played for 17 seasons in the NFL with Kansas City Chiefs. He was further inducted to the Pro Football Hall of Fame in 2019, and his eldest son, Nikko Gonzalez, was in attendance. After retirement, he has worked as an analyst for Fox Sports.

Apart from being a sportsperson, Tony Gonzalez is also a doting father of four kids, Nikko being the oldest. He welcomed his first child with his former partner, Lauren Sanchez. Therefore, here is everything we’ve found out about Tony Gonzalez’s son, Nikko Gonzalez, and his whereabouts.

Aforementioned, Nikko Gonzalez is the oldest child in the family. He was born on February 12, 2001, to footballer father and media personality, Lauren Sanchez. There isn’t much about the pair’s relationship details, but they parted ways shortly after Nikko was born.

Like an apple doesn’t fall far from the tree, Tony Gonzalez’s son, Nikko Gonzalez, is interested in games as well. Furthermore, Nikko played football during his time at Loyola School. The 6 feet tall, charismatic-looking boy not just shares his father’s interest in games but is the spitting image of Tony himself.

While going through Tony Gonzalez’s Instagram, we found out that Nikko graduated in 2020. He is close to his father and enjoys his company. Moreover, Tony is very happy for his son, who is off to college since August 2020.

While talking about Nikko Gonzalez’s mother, Lauren Sanchez, he maintains a good relationship with her. Furthermore, his mother announced her relationship with Jeff Bezos, in 2019. Nikko further met his mother’s boyfriend the same month in a restaurant.

Close To His Step Mother & Half-Siblings

Aforementioned, Tony Gonzalez’s son, Nikko Gonzalez, is the oldest in the family and probably maintains a perfect relationship with his stepmother, October Gonzalez. He often appears in the family portrait alongside his three half-siblings from his father’s side, River Gonzalez, Malia Gonzalez, and Sophia Gonzalez.

Moreover, the family of six also appears in each other’s important events showing support. For instance, the entire family, including Nikko Gonzalez, attended an event as their father was inducted into the Hall of Fame. Similarly, they were also present at Nikko’s graduation in 2020.

Nikko’s parents, Tony and October, met when she worked at a bar owned by Dennis Rodman in Newport Beach, California. The lovebirds started dating a few months after their first encounter and then exchanged vows in a commitment ceremony on July 20, 2007.

Since then, the Gonzalez couple welcomed three kids and maintained their relationship with great care, and embraced every moment together.

Nikko Gonzalez also has half-siblings from his mother’s side, Evan Whitesell and Eleanor Patricia Whitesell. Although Nikko’s mother, Lauren, is away from the media, she must share a good bond with her son.

Although Nikko is a constant face on his father’s Instagram, he likes to keep his personal life confidential. Thus, despite having a massive number of followers, i.e., 14.1k followers, his Instagram is private.

Not knowing more is always a bummer but living away from the media approach is Tony Gonzalez’s son, Nikko Gonzalez’s choice. But he is interested in sports and might as well pursue a career as a player. Therefore, we might see him playing amongst to-be stars in no time.

The name Nikko means people of victory and has an English origin.