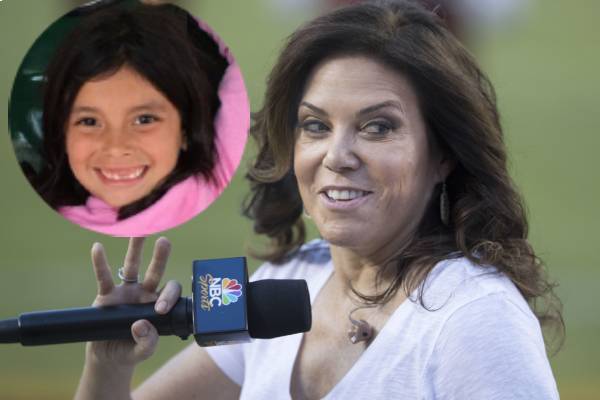 Michele Tafoya, born Michele Joan Tafoya, is a sportscaster from America who has been working as a reporter for NBC Sports. Besides that, she has worked for several other Television networks like CBS Sports, ABC Sports, and ESPN. In addition, Tafoya has established herself as one of the most prominent commentators in the sports world.

While Michele’s professional life is an open book but very little is known about her personal life. She has been sharing a wonderful marriage with Mark Vandersall since 2000 and has two kids. But not much information about their children has been revealed. So, who is the couple’s daughter, and how is she growing up?

Thus, let’s find out about Michele Tafoya’s daughter and her whereabouts.

As mentioned earlier, Michele shares a blissful marital life with Mark Vandersall, with whom she tied the knot in 2000. Nine years after their marriage, in 2009, Mark and Michele had adopted an infant baby girl. They adopted her from Colombia as a newborn and named her Olivia Valentina Vandersall.

Olivia was named Valentina at birth and she was born four months before her due, Michele and her husband adopted her. Furthermore, during the time of birth, she had an aortic coarctation which did not allow her heart to pump blood through her body at the required rate.

After Michele and her husband along with their son, Tyler Vandersall, arrived to adopt Olivia, they transferred her from a state-run hospital to a private children’s hospital. Tyler is the couple’s biological kid who was born in 2005.

Moreover, they had to stay in-country until the process of adoption was complete, due to which Michele, her husband, Mark, and their son, Tyler stayed there for seven weeks. At that time, they enrolled their son in swimming lessons while they were staying in Bogota.

Olivia Valentina Vandersall completed the Vandersall family after her parents adopted her. She has a great relationship with her elder brother, and the kids seem to be having a great time while growing up together.

Her Mom Had Suffered Two Painful Miscarriages In A Year

As stated above, Olivia and Tyler must be having a wonderful time while growing up together. Their family always has not been that happy and complete. There were some stormy days in their life, especially in terms of her mom’s pregnancy journey. Before giving birth to her brother, Olivia Vandersall‘s mom, Michele had suffered two painful miscarriages in a year.

After her first miscarriage, Olivia’s mom felt tremendous sadness and pain like any other woman who has experienced the same thing. However, that happened for a second time, and at that time, she apologized to her husband because she developed a feeling that she was responsible for everything that was happening.

Olivia’s parents have seven years age gap as her mom is seven years older than her dad. Her mom thought that her age was a factor behind the two miscarriages. Then, her dad and mom pursued infertility treatment and in vitro fertilization. Olivia’s mom managed one good embryo during the first Vitro fertilization process.

Miraculously, the embryo split, and Olivia’s parents were expecting twins. However, their happiness could not last long, and they lost their twins. It was devastating for both of her parents. But miraculously Michele conceived again and gave birth to Olivia’s brother.

Attends Several Games With Her Parents And Brother

As stated earlier, Michele Tafoya is a popular sports commentator from America. As a result, she has to be away from her home, husband, and kids for a long time. But, she is fortunate to have such a supportive husband and kids. Going through Olivia Vandersall’s dad, Mark Vandersall’s Twitter, we can see that he has uploaded several pictures of them together at different games.

Furthermore, Michele Tafoya’s daughter, Olivia, also attended Rio Olympics 2016 with her dad and brother. Plus, they all seem to be great fans of the University of Minnesota Golden Gophers football team. So, Olivia might have developed a certain interest in sports or might follow in her mom’s footsteps to become a renowned sportscaster.

Well, Michele’s baby girl must be living a wonderful life with her family in Edina, Minnesota. Nonetheless, we hope Michele Tayofa’s daughter, Olivia Vandersall has a great life ahead and becomes successful in whatever path she follows.

The name Olivia has the meaning Ancestor’s Descendant and has an English origin.