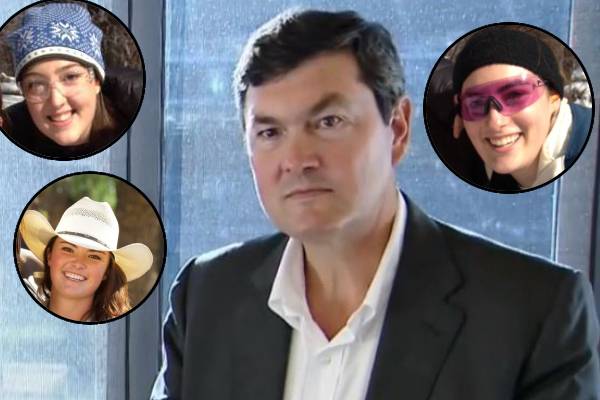 The Nutting family is one of the most influential business families. Robert Nutting, who currently serves as the President & CEO of Ogden Newspapers Inc., followed the legacy of his dad, G. Ogden Nutting. The latter also began managing and directing the company as the third generation. It can be assumed that Robert has taught his children about their family business, and who knows, they might also take over the business ventures of the Nutting family.

Robert is a proud father of three kids, whom he shares with his wife, Leslie Nutting. As they have come into the limelight from a very young age, people might be curious to know about them. So, in this article, take a look at Robert Nutting’s children and see what they are doing now.

The Kids Of Robert And Leslie

In their blissful marital life, the Nutting couple has welcomed three kids, all girls. Robert Nutting’s daughters, Cameron Nutting, Lachlan Nutting, and Taylor Nutting, must have grown up enjoying a comfortable lifestyle as they come from an influential business family. While the ages of the Nutting siblings remain a mystery, an article suggests that three of them were born in 1990, 1992, and 1997.

The Nutting siblings’ parents have been married for a long time now. The couple has however refrained from sharing the details regarding when they tied the knot and their dating timeline. However, the smitten pair attended the same college. So, could the duo have met at university?

Nonetheless, the Nutting girls seem to have a great bond with each other and must be doing well in their lives.

As mentioned earlier, the Pittsburgh Pirate owner has made a name for himself in the business world and has continued his family legacy. Like him, Robert Nutting’s daughter, Cameron, has also followed in his footsteps.

Cameron attended Philips Exeter Academy, and after graduating, she went to Williams College. In 2011, she graduated with a BA in Political Science, Leadership Studies, and Sociology. Later, she enrolled at The George Washington University, receiving a Master’s degree in Media and Public Affairs.

The Williams graduate has interned at several places, including The Pittsburgh Pirates and the United States House of Representatives. From 2011 to 2013, she worked as a Project Manager at Ogden Newspapers. In addition, she has experience working in several companies like BIA Advisory Services, Main Street Genome, Encore, and TNC Ventures.

In August 2016, Robert’s baby girl joined the Nutting Company as Director of Strategic Initiatives. Likewise, she also works as the Chief Revenue Officer in Ogden Newspapers. Cameron joined the company in 2011 and serves as Regional Publisher in the mid-Atlantic region. Her responsibilities include creating new revenue & growth initiatives across the company and also digital initiatives, new acquisitions, and products.

As a result of her work in different companies, Cameron must have earned significantly.

Two Of Robert’s Daughters Are Married

All of Robert Nutting’s children have already grown up. His daughter, Cameron Nutting Williams, shares a blissful marital life with Christophe Williams. The couple tied the knot on June 27, 2015. Furthermore, the married duo has a child together. Likewise, Robert’s other little girl, Taylor Wilde Nutting Gúrbacs, is also happily married to her husband, Gabor Gurbacs.

On the other hand, Taylor and Cameron’s sister, Lachlan, graduated from college in May 2018. She loves outdoor activities like horse riding, fishing, and hiking. Talking about Lachlan Nutting’s boyfriend, she has kept her relationship details a secret.

Nevertheless, all three girls seem to be doing well. Just like their dad, the sisters also seem to prefer privacy. Regardless, the Nutting couple and their daughters must be living a comfortable lifestyle. Let’s hope we will get to know more about Robert Nutting’s children in the coming days.

The name Cameron has a Scottish origin, and it means Bent Nose. Taylor is an English name meaning One Who Tailors Clothes. Furthermore, Lachlan is a Scottish name, meaning From The Land Of Lakes.