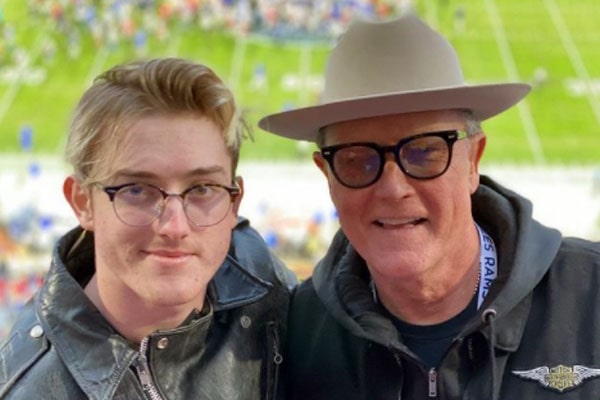 Robert Patrick is an established American actor and voice actor known for his villainous roles in several megahit movies. Patrick, who entered the American film industry in the 1980s from the movie Eye of the Eagle, starred as the main antagonist of the film Terminator 2: Judgement day as T-1000 in 1991. He reprised this role for a cameo in the 1992 comedy film Wayne’s World. Some of the other notorious films in which Patrick has appeared in are The Faculty, Spy Kids, The Men Who Stare At Goats, and Flags of our Fathers.

Besides being a successful entertainment personality, Robert Patrick is also a devoted family man with a loving wife and two kids. He took his wedding vows with actress Barbara Patrick or Barbara Hooper in 1990 and has been living a happy married life ever since. Together, the good-looking couple, Robert and Barbara, have two children, daughter Austin Patrick, and son Samuel Patrick.

Here, let us acquaint you especially with Robert Patrick’s son, Samuel Patrick, and what he is doing at the moment.

Samuel Patrick is the youngest child of the showbiz world’s exemplary husband-wife duo, Robert Patrick and Barbara Patrick. The pair named their son who was born on 18 August 2000 in tribute to Robert’s grandfather, Lt. Col. Samuel Patrick. Samuel did not just get his name after his great-grandpa but also is the spitting image of him. Once his famous dad, Robert, posted a picture of him alongside a photo of his great-grandad on his youthful days, showing the resemblance between them.

Furthermore, Robert Patrick’s son, Samuel Patrick, spent his childhood days in a normal environment, far from the unnecessary media dramas. Though his parents did their best to keep him away from the paparazzi, the media people still have captured a couple of pictures of him as a child. There are many photos of little Samuel attending various public events with his mom and dad available on the internet.

Aforementioned, Samuel Patrick has an elder sister, Austin Patrick, who arrived some years before his birth on March 23, 1997. They can often be spotted together having fun traveling to various places, enjoying holiday seasons, and attending various public events with their parents. Currently, Sam’s big sister, Austin, is pursuing her career in the American film industry as an actress. Also, she is establishing herself as a model.

A Student At Boston Conservatory at Berklee

As we mentioned earlier, both of Samuel Patrick’s parents, Robert Patrick and Barbara Patrick, are in the show business. Moreover, his sister, Austin Patrick, is also gradually finding success as an actress. So, growing up in a family with an acting background, it seems like the acting bug bit Samuel also. As a result, he enrolled at Boston Conservatory at Berklee, a top-performing arts college that offers degree programs in dance, music, and theater.

Robert Patrick’s son, Samuel Patrick’s Instagram bio, suggests that he is set to be a graduate of Boston Conservatory in 2023. Many well-known figures like Kylie Jefferson, Constantine Maroulis, Katharine McPhee, and Victoria Livengood also graduated from the same college. And, going through the social media pages of Samuel and his parents, it seems like he has already learned a lot about the entertainment industry from his college.

Like his sister, Samuel Patrick is also an aspiring actor with multiple talents. He is very good at dancing, singing, and obviously acting too, as the acting runs in his blood. To date, Patrick has participated and very beautifully performed in numerous short dramas and college plays. Unfortunately, it looks like he has not worked in any big movies to date.

Seeing Sam’s hard work and dedication to become a famous entertainment personality in the near future, it seems like it will not take him too long to gain stardom. We wish Samuel lots of luck for his upcoming days and his success in his chosen field.

The name Samuel is of Hebrew origin and from the Old Testament of the Bible, which means God has heard.