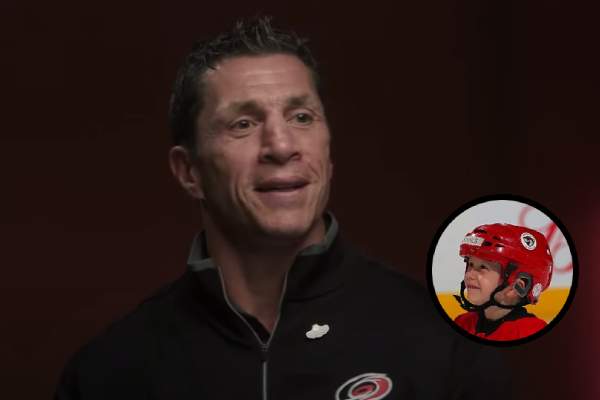 In addition to being a successful hockey figure, the head coach enjoys a blissful marital life with his wife, Amy Biedenbach Brind’Amour. He is also a doting and proud father to his four children. Many might be curious to know how his little ones are doing. Hence, in this article, we will learn more about Rod Brind’Amour’s son, Brooks Edward Brind’Amour.

Youngest Child Of The Coach

Brooks Edward Brind’Amour was born to the head coach and his spouse, Amy Biedenbach Brind’Amour, on December 19, 2011. He is currently ten years old and will turn eleven on his birthday in December 2022. As the title suggests, he is the youngest kid of his parents.

Rod Brind’Amour’s baby boy has three older siblings, who are actually the coach’s children from his previous marriage. Before tying the knot with Amy, the former ice hockey player was married to his ex-wife, Kelle Gardner Brind’Amour. The former couple exchanged their wedding vows in 1996 and separated in 2003 after staying together for seven years.

Has Huge Age Differences With His Siblings

As mentioned above, Rod Brind’Amour’s son has three older half-siblings; a sister and two brothers. Unlike the 10-year-old, his siblings have already grown up to be fine young adults. Brooks’ sister, Briley Brind’Amour, born on January 18, 1998, is almost 14 years older than him. The 24-year-old currently works as a Digital Marketing Specialist at 321 Web Marketing.

Likewise, the youngest Brind’Amour has an age difference of over 12 years from his eldest brother, Skyler Brind’Amour. The latter was born on July 27, 1999, and is pursuing a career as an ice hockey player. Lastly, Brooks is younger than his second brother by ten years, Reece Brind’Amour, who was born in 2001. Reece is a college student who attends the Parsons School of Design in New York.

Being the youngest child with an age difference of over a decade with his siblings, Rod Brind’Amour’s little boy must have been absolutely adored by them. In addition, he undoubtedly receives much love from his parents.

Member Of The Junior Canes Program

It appears that Rod Brind’Amour’s son is interested in ice hockey. Brooks is a member of the Junior Canes programs. Moreover, he was also the Youth Starter of the Game in a Carolina Hurricanes match in 2018. Could it be that he is considering being an ice hockey player in the future?

Well, it wouldn’t be surprising if Brooks does, considering both his father and brother, Skyler, have been heavily involved in the sport. In addition, even his mother and sister are quite athletic. Amy was on the dance team at her alma mater, the North Carolina State University. Likewise, Briley is a talented volleyball player who competed for James Madison University.

Although it is too early to assume whether he will be a sportsman when he grows up, we can be sure that he will find much success just like his family members. Also, considering how his father’s fortune is estimated to be $35 million, he must be growing up in a financially stable environment. The little guy is likely attending school at the moment. Nonetheless, we wish Brooks a bright and prosperous life ahead.

Brooks’ given name is a gender-neutral name of German and English origins and translates to “water” or “small stream.” Whereas, the name Edward is derived from Old English, meaning wealth or fortune.