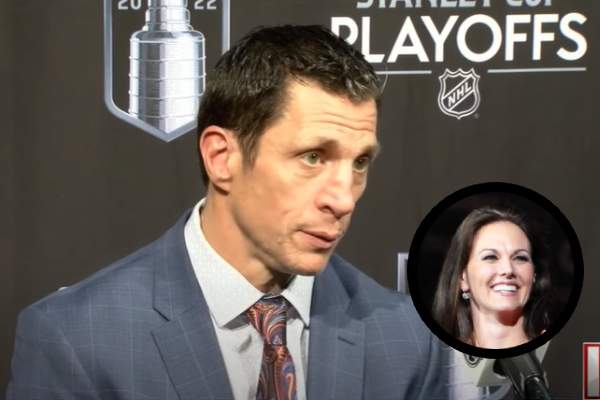 Rod Brind'Amour has been married to his wife, Amy Biedenbach Brind'Amour since 2010. Image Source: Social Media.

Aside from a successful career in the NHL, the coach enjoys a blissful marital life with his partner, Amy Biedenbach Brind’Amour. Many must be curious to know about who the lucky lady is. Therefore, we will learn more about Rod Brind’Amour’s wife in this article.

Daughter Of A Former Basketball Coach

Rod Brind’Amour’s spouse is one of two daughters of a well-known sports figure. Amy was born to Edward Joseph Biedenbach, aka Eddie Biedenbach, and his wife, Barbara Biedenbach. Her father is an American former basketball player and college basketball coach. Eddie coached at Davidson College, the University of North Carolina at Ashville, and more.

In addition, even Amy Biedenbach Brind’Amour’s mother, Barbara, is an athletic person. She is a graduate of North Carolina State University and a former cheerleader of the Wolfpacks. Moreover, Rod Brind’Amour’s wife has a sister named Tracy Biedenbach Frey. Unfortunately, the birth details of the siblings have not been revealed, making it difficult to assume who among them is the eldest.

Nonetheless, Amy’s sister, Tracy, is happily married and has two children. She shares daughter Riley and son Mason with her husband, whose information has not been disclosed yet.

Prior to his marriage with Amy, the ice hockey coach was previously married to Kelle Sullivan Gardner. The former couple tied the knot on August 4, 1996, and separated on September 10, 2003. The ex-pair eventually divorced in 2004, after staying together for about seven years.

After six years of his divorce, Rod exchanged wedding vows with his now-wife, Amy, on July 10, 2010. The ceremony was held in downtown Raleigh, North Carolina, in the presence of the duo’s friends and family. The lovebirds have been together for over eleven years ever since and will be celebrating their 12th anniversary in July, 2022.

Speaking of her profession, as per her LinkedIn profile, Amy has been working as the CEO at The Brind’Amour Compound since July 2010. Hence, Amy Biedenbach Brind’Amour’s net worth must be significant. On the other hand, her husband, Rod, has a net worth of $35 million.

After over a year of their marriage, the couple welcomed a healthy baby boy into their family. Rod Brind’Amour’s son, Brooks Edward Brind’Amour, arrived on December 19, 2011. Moreover, Amy is a stepmother to her husband’s three children from his previous marriage.

Rod Brind’Amour’s children with Kelle are named Briley Brind’Amour, Skyler Brind’Amour, and Reece Brind’Amour, who have all grown up to be stunning young adults. Although Amy appears to be a private person, she once shared a family photo back in 2014 with her spouse and their children on her Facebook account.

Although it has been quite a while since the post was uploaded, we don’t doubt that Amy must have been an amazing mother to her husband’s kids throughout the years. She seems to be enjoying a blissful and comfortable life with her family. Nonetheless, we wish Rod Brind’Amour’s wife continues to lead a happy and prosperous life ahead.