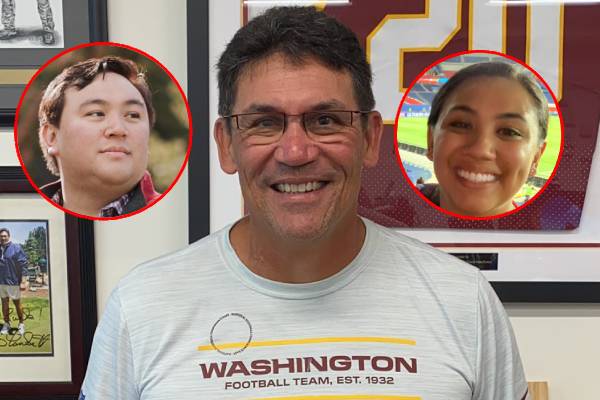 Ron Rivera has a son and a daughter with his wife. Image Source: Ron Rivera Twitter.

A team in NFL comprises of team manager, head coach, assistant coach, players, and many others required manpower to become the best among the bunch. Many of them have gained significant fame and fortune to their name. One such name is Ronald Eugene Rivera, also known as Ron Rivera. He is the head coach for the National Football League (NFL) team, Washington Football Team. He has also worked as the assistant coach for a number of teams, including the Chicago Bears, Philadelphia Eagles, and San Diego Chargers.

In his professional career, the 60-year-old coach has amassed a huge net worth for himself and has also gained worldwide prominence. Because of the fame, many NFL fans have shown interest in knowing about his personal life. Well, he has been married for a long time and is the doting father of a son and a daughter. Thus, in this article, let’s learn in detail about Ron Rivera’s children and their whereabouts.

The Washington Football Team coach Ron Rivera shares a blissful marital life with his wife Stephanie Rivera, with whom he has been married since 1984. Since then, the couple has been living a wonderful life with their two kids, a son and a daughter.

Ron Rivera’s son, Christopher Rivera, was born in 1986. Then, seven years later, on May 27, 1993, his daughter, Courtney Rivera, was born. Her arrival completed the Rivera family, and since then, they all have been enjoying a wonderful life together.

Ron Rivera’s children are growing up in a sports family, as their mom is a basketball coach and their father is an NFL coach. As a result, they also developed some interest in sports. Ron’s baby girl, Courtney, played softball in the early 2010s for the UCLA Bruins softball team. She had started playing softball in high school.

Courtney attended Cathedral Catholic High School in San Diego, California. There, she began playing softball and even earned All-Western League second-team honors. Moreover, she was named to the San Diego Union-Tribune All-Academic. Courtney even received a Coaches Award and was a scholar-athlete.

Upon completing high school, Ron Rivera’s daughter joined the University of California and continued playing softball. During the Winter and Fall quarters in 2011-2012 and 2012-2013, she made the Athletic Director’s Honor Roll. During the summer of 2013, she appeared in three games for Team Puerto Rico at the General Tire World Cup of Softball VIII.

Another great day to be a Bruin 😉 way to go @UCLAFootball @UCLAAthletics 💛💙 #GoBruins #4sUp pic.twitter.com/zUjxUyGVeP

In 2014, Courtney debuted in her collegiate playing career during the second game of a March 26 doubleheader against UC Santa Barbara. After striking out one in four innings, Ron Rivera’s daughter earned her first career win. Unfortunately, that’s the only year she played, and it is not known why she stopped.

While Courtney played softball during high school and college, Ron Rivera’s son seems to have pursued a different career. Christopher attended the University of North Carolina School of the Arts in 2004. In 2008, he graduated with a Bachelor of Fine Arts and Stage Management.

After graduating, Christopher worked as a Stage Manager at the Walt Disney Studios until November 2013. Then, for the next three years, he worked at Disneyland Resort as an Assistant Stage Manager, Assistant Project Controller, and Productions Specialist. Then, in February 2014, he joined Walt Disney Imagineering to work as a Production Coordinator. And in June 2015, he got promoted to Production Manager.

Furthermore, Ron Rivera’s baby boy also worked as a Production Manager at Kreate, Inc. before joining the Washington Football Team as Senior Manager and Special Projects in July 2021. Not only him, but his sister also works for the team as their social media producer.

Not only that, but Christopher’s sister also worked as a social media producer for the Carolina Panthers. Nevertheless, he must have earned significantly from his job and must be doing great for himself.

Ron Rivera’s children Courtney and Christopher are both grown-ups now. Not only that but his son, Christopher is about to get married. According to Verge Wiki, he is a proud gay man and is engaged to his long-time boyfriend, Andrew Ibarra.

As per their wedding registry in Zola, the couple is set to tie the knot on June 10, 2022. Similarly, they have also adopted a dog named Maui.

However, Courtney has kept her personal life private and has not revealed much about it. It is not known who she is seeing at the moment. Nevertheless, let’s hope we get to learn more about Courtney Rivera’s relationship in the coming days.

The name Courtney has an English origin, and it means A French Dynasty Name.

The name Christopher has a Greek origin, and it means Christ-bearer.