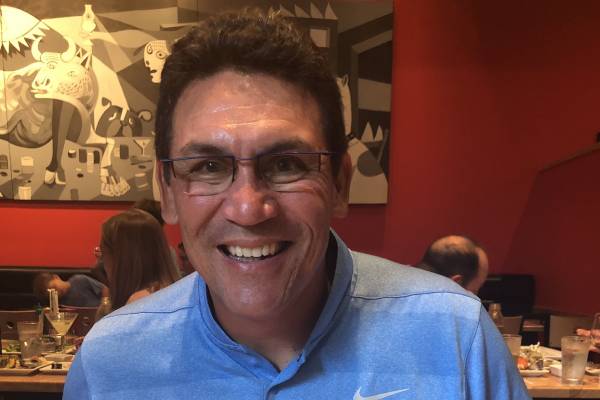 Ron Rivera is one of the most famous names in the NFL world. Born Ronald Eugene Rivera, Ron is an American professional football coach and a former football player. He is the head coach of the Washington Football Team and has even worked as an assistant coach for a number of teams. Because of the victories that he has led his team to, Ron has become known globally.

Apart from the fame and prominence, the question arises of how much the coach has amassed to his name. What are his riches and income sources? Thus, in this article, let’s learn in detail about the Washington Football team head coach Ron Rivera’s net worth and earning details.

Ron Rivera Net Worth And Earnings

Ron is mainly known for his involvement in the NFL world. He has worked with several teams in NFL and based on that, there’s no doubt that he has earned significantly. As per Celebrity Net Worth, Ron Rivera’s net worth is estimated to be $10 million.

So, how did the 60-year-old coach amass such a huge amount to his name and what are his income sources? Let’s find out all about Ron Rivera’s earning sources below.

Ron worked as a television analyst for WGN-TV and SportsChannel Chicago in 1993. His job was to cover the Chicago Bears and college football. Four years later, he began working as a defensive quality control coach of the Bears.

Ron then joined the Philadelphia Eagles in 1999 to work under the head coach Andy Reid as the team’s linebackers coach. He worked with the Eagles for five years, and they even advanced to the NFC championship for three consecutive seasons.

In 2004, the Chicago Bears hired him as their defensive coordinator. In the 2006 season, he earned $500,000 as a salary from the team but left soon after. He later worked with the San Diego Chargers in various positions from 2007 to 2010.

Then, in January 2011, Carolina Panthers hired him as their head coach. He reportedly signed a four-year contract worth $11.2 million with the team. He secured a 3-year contract extension with the Panthers in 2016, which was worth $19.5 million.

Ron again signed a two-year deal with the Carolina Panthers. The contract that was worth $15.5 million kept him through the 2020 season. However, after serving as the head coach for nine seasons in December 2019, the Panthers fired Ron. According to Celebrity Net Worth, he received $7 million as an annual base salary during his time with the Panthers.

In January 2020, the Washington Redskins named him their new head coach. Rivera signed a five years deal with the team. However, the contract details have not been made public yet. But, given that he has several years of coaching experience, he might earn a lot from the team. As of the 2021 season, Ron is the 10th highest-paid NFL coach.

Looking at his career earnings with the different teams, Ron Rivera’s net worth of $10 million seems considerable. And as the year passes, he might earn more which will then increase his riches.

Also Read: Know How Much Sean McVay’s Net Worth And Earnings Is

Like other players, Ron too began playing football at Seaside High School, from where he graduated in 1980. He attended the University of California, Berkeley, and played for the Cal Golden Bears as a linebacker. He was granted many awards and honors for his performance during his final season in 1983.

Then, in 1984, Chicago Bears selected Ron in the second round of the NFL Draft. He played for the team as a rotational linebacker and special teamer. Ron won the Super Bowl XX the following year, which marked him as the first American of Puerto Rican descent to win it. In 1988, he received the team’s Man of the Year, and he is the 1989 Ed  Block Courage Award recipient.

As mentioned earlier, Ron Rivera’s net worth is $10 million. With a multi-million dollar’s worth of riches, the NFL coach must be living a wonderful life. Ron resides in Great Falls, Virginia, with his wife, Stephanie Rivera, and two kids Courtney Rivera and Christopher Rivera.

In April 2020, Ron purchased the house where he is residing now for $2.2 million. The home consisting of 5 bedrooms was initially listed in May 2019 for $2.5 million. Later, the price was reduced to $2.4 million.

As Ron is still very active in his professional career, there is no doubt that his wealth will see a significant increment in the following years. As a result, he will be able to live a comfortable life for days to come.