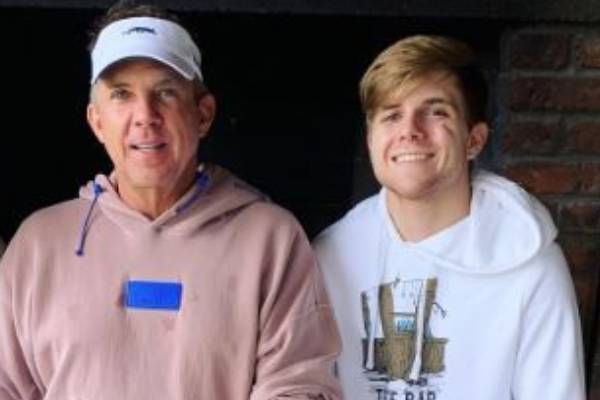 Patrick Sean Payton, aka Sean Payton, is a well-known American football coach who has established himself as one of the most successful NFL head coaches. He is the former head coach of the National Football League (NFL) team New Orleans Saints and has previously worked with different other teams. He has spent over two decades as a coach and has also played for various teams.

Talking about his personal life, the NFL coach is a doting father of two children, a son, and a daughter. He shares the kids with his former wife, Beth Shuey. Because of his fame, many are curious to know about his personal life. Thus, why don’t we learn about Sean Payton’s son, Connor Payton, and what he is doing now?

On May 31, 2000, Connor Payton was born to Sean Payton and Beth Shuey McGuire. Connor’s parents had met in the early 1990s while attending Indiana State University. Then, they had exchanged the vows on July 11, 1992.

Furthermore, Sean Payton’s son Connor Payton grew up in Mandeville, Louisiana, alongside his elder sister Meghan Payton, who was born in 1996. However, according to various sites, her parents welcomed her in 1997.

Connor Payton and his sister grew up in a loving environment with their parents. Furthermore, as the younger child, he must have been pampered really well by his sister and parents.

Sadly, Conno Payton’s mother and father separated after being married for 20 years. In 2014, their divorce was finalized.

Any kids of sports personalities following in their parents’ footsteps is not a new thing. They might play the same sports that their family members played or any other sports. Well, the same has happened in the case of the NFL coach Sean Payton’s little boy.

Connor was six years old when his dad was first hired as the head coach of the New Orleans Saints. Then they moved to New Orleans. Furthermore, when he was in sixth grade, Connor Payton’s dad, Sean, had coached him and his team. At that time, Sean was suspended from NFL and was working as the offensive coordinator for the youth football team.

The youngest Payton sibling had attended Liberty Christian School in Fort Worth and played football there. In 2018, he even shared his Junior Year Highlights on his Twitter. After graduating from high school, Connor began his further studies at Texas Christian University on July 31, 2019. Although he had played during his school days, he is not a member of the university’s football team.

Although Connor does not play football anymore, he is a huge fan of the sports. He has always claimed him to be a fan of the Saints. Moreover, during a conference, Connor Payton’s father, referenced that he wanted to get into the front office. As he has spent fifteen years around the Saints, the university student feels like doing something with the team.

Connor often shares several throwback pictures of him attending different football or basketball matches with his dad. Even when his father announced his retirement from the Saints in 2022, he shared a heartwarming post on his Twitter.

The Who Dat Nation made me who I am today! Forever grateful to the fans and the city of New Orleans, will always be a Saints fan at heart⚜️🖤 https://t.co/yCytY7UUjv

Nevertheless, let’s hope Connor figures out soon what he wants to do in his career. Whatever he does, his dad will support him wholeheartedly.

Also Read: Take A Look At How Tamara Ecclestone’s Daughter, Sophia Ecclestone Rutland, Is Growing Up

A Movie Is Based On Him And His Dad

On January 28, 2022, Netflix released a sports comedy film, Home Team, which Charles Kinnane and Daniel Kinnane had directed. The movie is inspired by the actual events and tells the story of when Connor Payton’s father coached his football team.

In the 2012 season, after an NFL investigation, Sean was found to be involved in the Bountygate scandal and was suspended for a year. At that time, he returned to his hometown, reconnected with his 12-year-old son, and coached his football team. The movie is based on this incident.

Kevin James plays the role of Sean while Tait Blum plays Connor, Sean Payton’s son. Besides them, several other actors, including Taylor Lautner, Rob Schneider, Jackie Sandler, Gary Valentine, and many others, have appeared in the movie.

The film portrayed the relationship between Sean and his son. Many NFL fans have loved the movie and have given good reviews.

Sean Payton’s son, Connor Payton is a grown-up now and is about to complete his undergraduate degree. As the movie was released, many of the NFL fans showed curiosity to know more about Connor. They want to know about his lovelife and the lucky girl dating him.

Well, Connor himself has not revealed anything about his lovelife. It is not known if he is seeing someone or is single. While his sister, Meghan, has been pretty open about her relationship with Christopher Titone, Connor, on the other hand, seems to be preferring to keep it private. However, many sites have mentioned Audrey Carrington as Connor Payton’s girlfriend.

Nevertheless, Connor seems to be doing well and is in sound health. Let’s hope we get to know what he will pursue in the coming days.

Connor has an Irish origin which means Descendent of Hound, Desire.