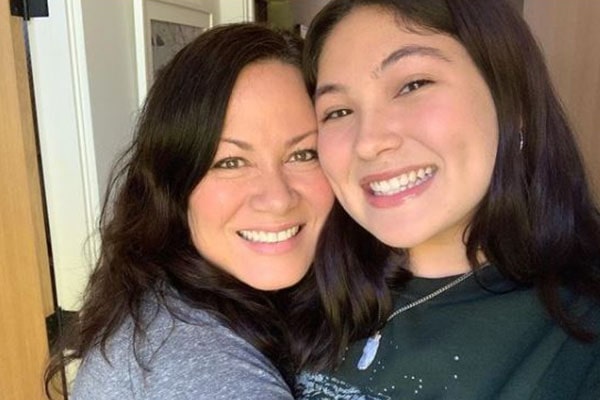 Shannon Lee and her husband has a daughter together. Image Source: Shannon Lee Instagram.

Born Shannon Emery Lee, Shannon Lee is an actress, businessperson, and martial artist of American nationality. She is also popular as the only daughter of the legendary martial arts and film star Bruce Lee. Shannon, who started her acting career by playing a cameo in the 1993 biopic film of Bruce Lee, Dragon: The Bruce Lee Story, has also acted in several other movies and series.

Besides her phenomenal acting career, Shannon is also a businessperson. And apart from her exemplary professional life, she is a doting mother of a kid, Wren Keasler, with her husband, Ian Keasler, or Anthony Ian Keasler.

Is The Only Child Of Shannon Lee

As stated earlier, Shannon Lee has a daughter with her husband, Anthony Ian Keasler. Well, Wren’s father is a professional art designer. According to some sources, Shannon and Anthony met in 1988 and began their relationship the same year in August. Six years after dating each other, Wren’s parents exchanged the vows in an intimate ceremony in August 1994.

As both of them prefer their personal life away from the spotlight, much information regarding their marriage has not been revealed yet.

Eight years after their marriage, Shannon gave birth to their daughter, Wren Lee Keasler, in December 2002. As of 2021, Wren is 19 years old, and she seems to be doing great for herself. We can see that Anthony and Shannon raised their daughter with great love and care.

Is A Supporter Of LGBTQIA Community

Shannon Lee’s daughter is a student of the class of 2025 at the Tulane University. According to the description of her Instagram account, she is a supporter of the LGBTQI community. However, due to her private Instagram account, it is not revealed what she does and how she supports the community.

But she might be vocal about the issues and try educating people about what an LGBTQI community is and how to support them.

As stated earlier, Shannon Lee is Bruce Lee’s daughter with Linda Emery. Bruce Lee is considered to be the most influential martial artist of all time. To this day Bruce is regarded as one of the greatest martial artists. Even after his death in 1973, his legacy has not been forgotten, and till today, he has continued to be a prominent influence.

Wren’s mother, Shannon, has been working on to carry the legacy of her father and late brother, Brandon Lee. She currently serves as the president of the Bruce Lee Foundation and even worked as the executive producer of The Legend of Bruce Lee and How Bruce Lee Changed the World, a television series and the documentary based on her father’s life, respectively. She even handles the social media of Bruce Lee and her brother Brandon and hosts the Bruce Lee podcasts.

Just Like Shannon, Wren is also helping her mother keep the legacy of her grandfather alive by running the Bruce Lee Snapchat. Being born into a family where all the members are involved in the martial arts, there is the possibility that she is also a martial artist. Just like Wren’s family member, she might also achieve significant success in her career.

Nevertheless, Shannon Lee’s daughter Wren might be doing great for herself and is possibly living a comfortable and blissful life with her family.

The name Wren has an English origin and it means “Small Bird.”