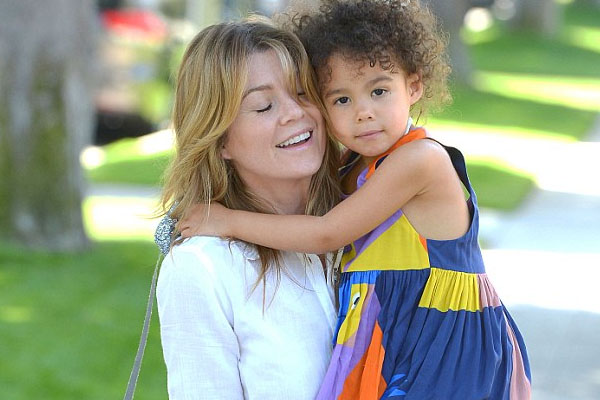 Ellen Pompeo’s daughter Stella Luna Pompeo was born on September 15, 2009. She is the first born child of Ellen Pompeo with her husband, Chris Ivery.

Ellen and Chris welcomed their second daughter Sienna May Pompeo in 2014 when Stella was just five years old. Though Ellen Pompeo rarely shares about her family life, in an interview of The Ellen show, she revealed that Stella thought her sister was somebody else and had asked her parent when she was going to leave. She was small back then and it’s natural for every sibling to have little jealousy.

However, Stella loves her sister, Sienna. She has been often spotted by the side of her sister whenever Ellen Pompeo and family go out for a short walk or shop.

In general, Ellen Pompeo isn’t the type to showcase her children online. It might be because Ellen would prefer her children to stay out from the media spotlight to avoid negative comments.

Stella once told her mother that she ruined her life. Why was that? Watch what Ellen has to say about this.

For every child, their parent is their role model. They imitate things from an elder and try to be like them. Ellen Pompeo is a great actress and being the daughter of such a talented mother, everyone wonders whether or not that Stella can be an actress like her mother. Though there is no sign of Stella being involved in acting,

Grey’s Anatomy star loves posing alongside her daughter Stella. She once shared a picture of them together getting ready for Halloween.

Ellen stated that she would allow her daughter Stella to pursue a career in acting when she reaches eighteen years old. They look pretty similar in the personality.

The name Stella is a Spanish word. It means a star. As for the name Luna, it is also a Latin baby name which means the moon.