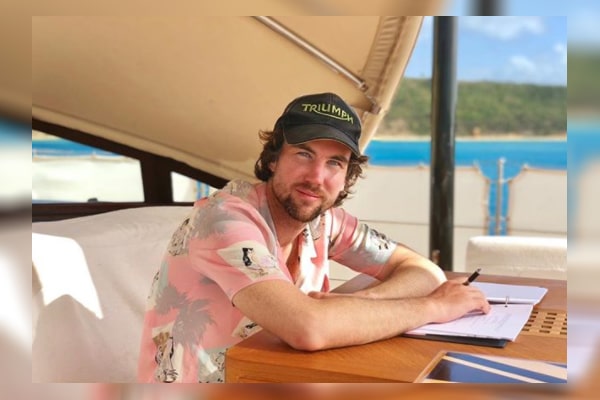 As of now, Wilding Jr.’s son, Tarquin Wilding, has grown up into a fine man and managed to keep up the family’s legacy. Let’s learn more about Wilding’s whereabouts from here on.

Elizabeth Taylor is an English-American actress, businesswoman, and humanitarian who began her career as a child actress in the early 40s. She further became a notable icon of classical Hollywood by the 50s.

Belonging to the legendary family, Michael Wilding Jr’s son, Tarquin Wilding, tried to keep the family’s name and tried his luck in acting/filmmaking.

According to Wilding’s IMDb, Tarquin has appeared in a few movies, including Shameless, 1UP a Game Story, Silent But Deadly, etc. Besides the recorded shows, he must have worked in several undocumented shows as well.

As an aspiring filmmaker, Elizabeth Taylor’s grandson, and Michael Wilding Jr.’s son, Tarquin is doing a phenomenal job of keeping his family’s legacy intact. Besides his family namesake, Tarquin is also paving his path without the use of the family names.

Furthermore, Tarquin is an avid dog lover, motorbike enthusiast, and private. He also has 2 half-sisters, Laela Wilding and Naomi Wilding.

Known for versatile acts and philanthropic works, Elizabeth Taylor managed to keep her name alive even after decades. Furthermore, her grandson, Tarquin, is continuing to keep her charitable works.

Born on July 21, 1989, in LA, California, as Tarquin Palance Wilding, Michael Wilding Jr.’s son embraces his granny’s legacy. Furthermore, he continues to carry on her legacy as part of the fight toward securing a better future for those living with AIDS. He further aims to see an AIDS-free generation like his grandma, Taylor.

The charming lad, Tarquin, is very sensitive and remembers Elizabeth as a strong woman. He often feels lucky to be surrounded by sensitive people and admires his grandma’s generosity. Hence, to honor her, Tarquin continues philanthropic work as an ambassador to The Elizabeth Taylor AIDS Foundation.

Besides being a phenomenal actor and cinematographer at a young age, Michael Wilding Jr.’s son, Tarquin, is married. He has been committed to his model wife, Kasimira Wilding, for several years.

The gorgeous couple shared vows in 2018 amidst friends and family. While going through Wilding’s wife, Kasimira’s Instagram, we could see their elegance on the big day.

Furthermore, Tarquin and Kasimira dated several years before making their relationship ‘government approved.’ Similarly, the love birds do not shy away from sharing their love with their followers.

Father Of A Child

As a blessed couple, Tarquin is enjoying a blissful marriage with a gorgeous wife, Kasimira. Besides being a husband, he experiences the father’s wondrous feeling as they welcomed their first child, Violet Wilding, in 2019.

The pregnancy news appeared in April 2019 via Tarquin’s wife, Kasimira’s Instagram. Furthermore, they announced the birth on August 29, 2019.

Tarquin Wilding’s baby girl is as cute as himself and might have inherited a hint of Taylor’s beauty. Let’s hope the family of three proliferates and enjoys family time.

Tarquin is a Roman clan name that has a Latin origin.