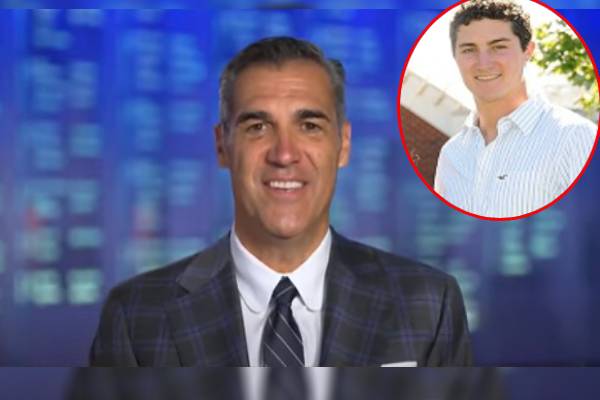 The Villanova Wildcats made it to the 2022 NCAA Final Four along with other three teams, North Carolina Tar Heels, Duke Blue Devils, and Kansas Jayhawks. The acclaim for this achievement goes to the players and the head coach, Jay Wright.

With more than four decades-long careers as a player and coach, Jay has established himself as one of the best college coaches. Apart from this, Jay Wright is a proud father of three kids. So, in today’s article, let’s learn about Jay Wright’s son Taylor Wright.

Taylor Wright’s father, Jay Wright, shares a blissful conjugal life with his mother, Patricia Reilly. Taylor was born as the eldest child to his parents on 27 November 1992.

After welcoming Taylor, his parents gave birth to his brother, Colin Wright, also known as Collin Wright, and his sister, Reilly Wright.

Taylor Wright’s parents attended different colleges but met and fell deeply for each other. Although his parents have not disclosed any details of their marriage, they are still happily together.

Jay Wright’s son Taylor Wright and his siblings seem to have grown together and must share a close bond with each other.

Was A Three-Sport Athlete

The head coach’s eldest child was born and brought up in Berwyn, Pennsylvania. He attended Episcopal Academy and graduated as a high honors student.

During high school, Taylor was a three-sport athlete. He played as a forward for the basketball team, quarterback for the football and pitcher, and middle infielder for the baseball team.

In addition, he was the captain of his high school basketball team in 2011. Also, his team was the first to receive an All-Conference selection. He also led the team in strikeouts.

Moreover, Taylor held the school record for the most passing yard in one football season and was the second team All-Interscholastic League selection for basketball in 2011.

Seeing as he played three different sports in high school, it is evident that Taylor inherited his dad’s athletic genes.

As a passionate athlete, the head coach’s baby boy joined Brown University in 2012 and played for the university’s baseball team as a pitcher. The young athlete gained much attention through his extraordinary performances in matches. For instance, during the first year, he appeared in 18 games.

Taylor appeared in 11 games during his senior year, including five starts, and ranked third on the team with 38.2 innings pitched and 28 strikeouts. His university team also won against Yale University in 2015.

Aside from the sport, the young player also concentrated on Public Policy and American Institutions. Being a professional baseball player was his aspiration. However, he quit basketball after college and started to focus on other fields.

Furthermore, Taylor earned his Master’s degree in Business Administration (MBA) from Villanova University in 2017. Eventually, he served as a trader at Stevens Capital Management LP from 2016 to 2019. Currently, he is working as a History teacher at The Episcopal Academy.

Who Is Taylor Wright’s Girlfriend

Taylor Wright came into the spotlight due to his playing career and for being Jay Wright’s son. He has been getting public attention for a long time now. As he is already at the age to start his own family public has grown curious about his love life.

However, the young athlete has successfully kept his love and personal life away from media scrutiny. Apart from that, he is rarely active on social media platforms. As a result, there are no details about Taylor Wright’s girlfriend.

Additionally, anyone dating such a talented player would be the lucky one. Likewise, even if he is dating someone, it seems like Taylor wants to protect his partner’s privacy.

Talking about his siblings, his younger sister is Reilly, who is pursuing a Doctor of law and is dating a guy. However, no details have been revealed yet.

Nevertheless, let’s hope we will soon get to hear some exciting news about Jay Wright’s son Taylor Wright in the coming days. Hopefully, he will have an incredible career and life in the future.

Taylor is an English name meaning Cutter of Cloth.