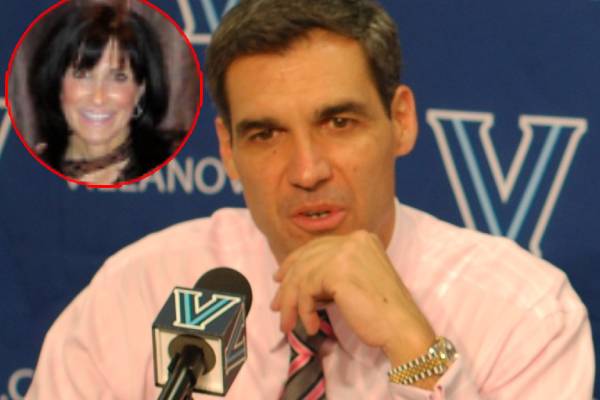 Jay Wright and Patricia Reilly met while they were at college. Image Source: Wikimedia Commons.

Jerold Taylor Wright Jr., also known as Jay Wright, is the men’s head coach at Villanova University. He has been serving in the position since 2001. Widely considered as one of the best coaches in NCAA history, Wright has led his team to win many basketball tournaments.

Apart from his successful career, Jay Wright’s marriage is also long-running. He shares a blissful marital life with Patricia Reilly, with whom he has also welcomed three children. So, without any further ado, let’s know about Jay Wright’s wife and their marital life.

Jay And Patricia Met At College

As mentioned earlier, Jay Wright is happily married to Patricia Reilly. The married duo has been married for a long time now. As per Fabwags, the duo met at colllege.

Jay Wright’s wife attended Villanova University and was a member of the cheerleading squad there. On the other hand, he was a student at Bucknell University. He was working in the marketing department with the Philadelphia Stars of the old United States Football.

They met for the first time when he joined team cheerleaders, including Patricia, for a publicity event. The Stars’ mascot had failed to show up, so Jay had to wear the furry, gold custom and even served as a one-man constellation.

Sometime after their first meeting, the couple began dating. After graduating, Patricia and Jay walked down the aisle together. But, the exact date of their wedding has not been disclosed yet as the married duo prefer to keep their marital details private.

Nevertheless, their marital life is still going strong, and in all these years of being married, the duo became doting parents of three children.

Jay Wright’s Wife Is A Proud Mother Of Three

As mentioned earlier, after tying the knot, Jay and his partner welcomed three kids, two sons, and a daughter together. Jay Wright’s spouse, Patty Reilly gave birth to their eldest son, Taylor Wright in 1992. While she was in labor with her kid, the doctor asked her husband about basketball.

A year after the birth of her first son, Patricia gave birth to her second son, Colin Wright, also known as Collin Wright. Furthermore, her youngest child is her daughter Reilly Wright who was born in the late 1990s.

Patricia and her husband raised their children away from the media limelight. The couple has not shared any information related to the kids.

Has An Inactive Law License

As mentioned earlier, Jay Wright’s wife went to Villanova University. There she studied law and graduated with a law degree. However, she does not keep her license active. It seems like Patricia has dedicated her life to being a mom and a housewife.

Jay Wright’s spouse is his biggest supporter. She has always been with him during every match to give him smooches or big hugs whether to congratulate him or console him. Patricia’s hubby also speaks about her time and again and even credits her with keeping the family grounded.

The Wright couple has been through several ups and downs together. In August 2017, Patricia and her husband received the inaugural Saint Augustine Medal. It is awarded by the Augustinian Province of Saint Thomas of Villanova to an individual or couple exemplifying the teachings and spirit of Saint Augustine. She received the award with her spouse for her dedication to Villanova and its students for many years.

Life is a mixture of ups and downs, and Patricia and her hubby had to go through some problems too. In 2012, Patricia Reilly’s husband faced the allegation of having a relationship with a co-ed and getting her pregnant. The rumor even claimed that he would be resigning after he cheated on his wife with a first-year student of the university.

The couple was aware of the rumor but did not address it publicly.

Whatever might be the problems, Patricia and Jay have tackled them together, and their marital life is still going strong. Let’s hope they continue to enjoy their blissful marital life over the years.