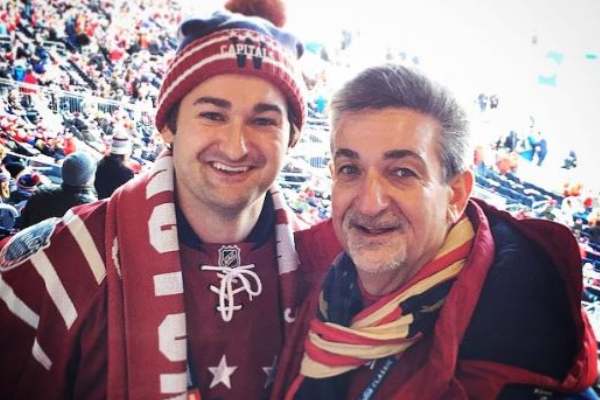 Imagine living alone without your family members or loved ones for a lifetime. Sounds terrifying, right? No matter what your status is, family is the most crucial part of your life, and they are the ones who motivate us to achieve something.

Likewise, the American business magnate might not be the “Ted Leonsis” if he had no one to support or root for him. Besides handling a multi-billion worth business empire, he enjoys a content life with his wife, Lynn Leonsis, and their two children. The kids have already grown up, and people must be wondering if they have followed in their dad’s footsteps.

So, take a look at this article about Ted Leonsis’ son, Zachary Leonsis.

Born Into An Affluent Family

Ted and Lynn Leonsis, in October 1988, welcomed Zach Leonsis. A year earlier, in August 1987, Zachary Leonsis’ parents had tied the knot. The couple was ecstatic with his arrival, and their happiness doubled. Then, in 1992, Zachary Leonsis’ sister, Elle Leonsis, arrived.

Being born into an affluent family, the Leonsis siblings must have had a better childhood. Their mom and dad must have fulfilled their needs without any worries. Likewise, the Leonsis duo instilled good manners and principles in Zach and his baby sister.

Went To An Ivy League School

The multi-billionaire Ted Leonsis’ son went to The Potomac School, a private school in McLean, Virginia, and graduated in 2007. Then, he enrolled at the University of Pennsylvania, an Ivy League school, and graduated in 2011 with a Bachelor’s degree in Communications and Commerce.

Two years later, Zachary started pursuing his graduate degree at Georgetown University McDonough School of Business. In 2015, he graduated with a Master’s degree in Business Administration. He has worked on behalf of his alma mater.

It is no wonder that kids follow in their parents’ footsteps. They receive knowledge of the respective field from a very young age by watching their folks. In the case of Ted Leonsis’ kid, Zach must have learned several things and ideas from him at a very young age. So, business ideas must have been instilled in him from early childhood.

Zachary currently serves as the President of Media and New Enterprises at his dad’s firm Monumental Sports & Entertainment. He manages all of the media rights relationships of the company, and all media revenues report to him. In addition, he also looks after all M&A, private equity investment opportunities, and venture capital. He also represents Monumental on the board of directors of NBC Sports Washington and Team Liquid, an esports team.

In recognition of his works, the Washington Business Journal and Sports Business Journal honored Leonsis Jr. in their “Forty Under 40” lists in 2022. The latter also featured him as an “RSN Power Player.” Additionally, he was featured as one of the top 20 innovators of SportTechie.

Congratulations @ZacharyLeonsis on being named to @sbjsbd‘s Forty Under 40 Class of 2022, recognizing executives across the sports industry for excellence and innovation in their careers! #SBJ40u40 pic.twitter.com/IsqdmtSWqY

Likewise, Ted Leonsis’ son was one of the board members of the Acies Acquisition Corp. from October 2020 to June 2021. Zach’s other professional ventures include serving on Advisory Board on Service and Volunteerism of the Virginia Governor. He has also been involved in several charitable and philanthropic activities.

Hence, Zachary must have earned considerably. Furthermore, in March 2018, he purchased the Kalorama mansion for $9 million, which was listed for $9,975,000. The Politico founder Robert Allbritton formerly owned the six-bedroom house and sold it to the owner before Zach in 2007.

Zachary Is Married To His College Sweetheart And Has A Child

Talking about his personal life, Ted Leonsis’ baby boy is a loving husband to Melissa Leonsis. The couple met in 2009 as undergraduates at the University of Pennsylvania. He was in his junior year, while Melissa was a freshman. After completing college, Zachary Leonsis’ girlfriend moved to Washington, where he was working for the family business as a VP.

On July 4, 2016, Ted Leonsis’ only son got down on one knee at Grand Wailea resort in Maui. It was a special place for Zachary Leonsis’ wife, Melissa Cook, as she used to visit there annually with her parents when she was a young girl. The lovebirds were engaged for some time, and in September 2017, they walked down the aisle.

The duo’s wedding ceremony took place in Zach’s parents’ Potomac, Maryland, backyard. After exchanging their vows, they danced in elegant tents and departed from there in a vintage Roll-Royce.

As of 2022, it has been four years of their marital life, and the pair are proud parents of a child. Zachary Leonsis’ daughter, Olivia Kathryn Leonsis, arrived on September 9, 2021. He shared the news through his social media page. The little girl seems to be doing well and is growing up surrounded by immense love and care.

On the other hand, Zachary seems to be progressing well in his professional work. Hopefully, he will keep up to his dad’s name in the industry or might even become more successful than him. Only time will tell. We wish Mr. Leonsis abundant happiness and blissful days ahead.