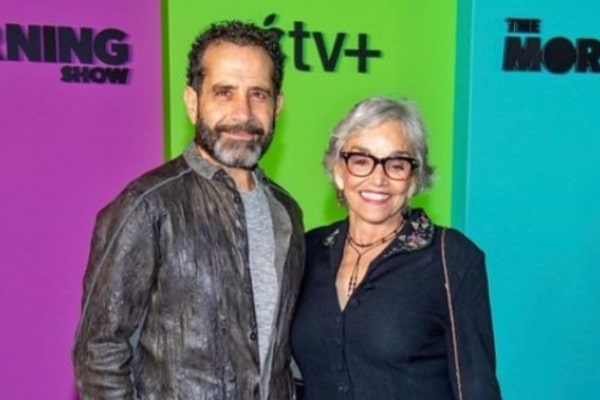 The Monk and Wings star, Anthony Marc Shalhoub, also goes by Tony Shalhoub. With his career stretching over four decades, Shalhoub has starred in hundreds of movies and series like The Marvelous Mrs. Maisel, Galaxy Quest, Teenage Mutant Ninja Turtles, and many more to list.

Talking about the Rosy actor’s personal life, he shares a blissful marital life with his wife of three decades, Brooke Adams. In addition, he is a proud dad of two grown-up children, Sophie Shalhoub, and Josie Lynn Shalhoub. So, in this article, let’s get to know Tony Shalhoub’s daughter, Sophie, including her profession, partner, and children.

Is A Second Adoptee

Tony Shalhoub and Brooke Adams adopted Sophie Shalhoub two years after walking down the aisle in 1992. She was born in 1993 and is the youngest baby of her parents. Her elder sister Josie Lynn was born on 14 May 1989. Sophie’s mom first adopted her sibling as a single woman. The Shalhoub sisters grew up together, surrounded by their parents’ love and care. Thus, they must share a close-knit bond with each other.

Brooke Adams’ daughter, Josie, is a talented writer whose essays, stories, and food writing have appeared in Audible, McSweeney’s, and Bon Appetit magazine. In addition, she is happily married to Traver and has a lovely son, Tucker Anthony Tischio.

Also Read: Did You Know A Martinez’s Daughter – Devon Makena Martinez Is Into Acting And Singing?

As a celebrity baby, many people might assume that Sophie must have followed in her parent’s footsteps. Well, the youngest Shalhoub seems to be more into horse riding than acting. As per Amomama, she is an equestrian and was the manager of the Blazing Ridge Farm, a horse sanctuary.

However, it is not sure if the beautiful lady has continued her career as a horse rider. Furthermore, her Instagram bio states, that home is where the horses are. Is it possible that she is still involved in horse riding?

Additionally, she seems to have tried her hand at acting also. There is an IMDb page of Sophie Shalhoub with one acting credit for working in the TV series All Downhill From Here. Brooke and Tony also starred in the series. Various sites have also reported that the Monk star’s daughter appeared in the television series as Lola from 2015 to 2017.

Is Sophie Dating Anyone?

While the elder daughter of Tony and Brooke has her own family of three, it is a matter of curiosity regarding their younger kid’s love life. In 2014, Vineyard Gazette reported that Brooke Adams’ daughter lived in the Vineyard with her boyfriend, Devon. At that time, Sophie Shalhoub’s partner worked as a local farrier, a person or craftsman who trims and shoes horses’ hooves. It has been almost a decade since that report. It is not sure if the duo are still together or have already broken up.

In addition, the Wings star’s little girl prefers to stay away from media scrutiny. She is present on Instagram but it is private. As a result, it has become challenging to know updates about Sophie Shalhoub’s boyfriend and love life.

Overall, Brooke and Tony Shalhoub’s daughter was adopted and grew up with her elder sister. For now, she might be doing well as an equestrian or whatever her profession is, and her parents are very supportive of her career. At last, we wish Sophie Shalhoub and her loved ones a successful career and a joyful life ahead.

The beautiful name Sophie is of Greek origin that means wisdom. The name was used by European royals in the Middle Ages.