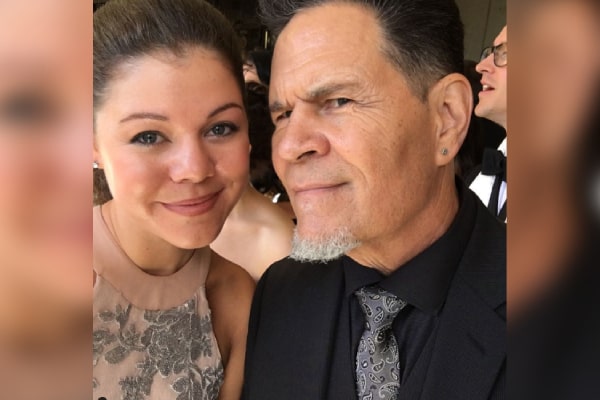 Devon Makena Martinez is the second baby of A Martinez and his wife, Leslie Martinez. Image Source: Devon Martinez Instagram.

You must be familiar with the name Adolfo Larrue Martínez III, aka A Martinez. If not, he was the one who portrayed Jacob Nighthorse in Longmire and Stax in Cowboy Bebop. The Daytime Emmy Awards-winning actor has starred in hundreds of movies and television series.

While he has amassed an enormous name and fame in his professional life, he leads a beautiful family of five with his wife of forty years, Leslie Bryans. The couple has three lovely kids together, who have already grown up. Hence, today let’s get to know A Martinez’s daughter, Devon Makena Martinez, including her profession, education, and love life.

Devon Makena Martinez was born as the second baby to her parents. Before Devon, her mother gave birth to her elder brother, Dakota Lee Martinez, on 25 July 1986. In addition, she has one younger sister Ren Farren Martinez who arrived in September 1993.

The Martinez pair are doting parents who wholeheartedly support their kids’ careers. Not only that, Devon and her siblings are supportive of their mother and father’s careers. Plus, the family shares a solid bond with each other and often spends quality time together.

Devon’s younger sister, Ren, has followed in their parents’ footsteps and has released several songs and albums. The youngest Martinez also holds an undergraduate degree in popular music performances from the University of Southern California.

Also Read: Get To Know Anthony Edwards’ Daughter – Wallis Edwards, Who Is A College Student

Aspired To Be Aretha

By honoring the legendary singer Aretha Franklin, A Martinez’s little girl, Devon expressed her heartfelt condolences after the songstress’ passing in August 2018. She also revealed that her childhood role model was the Chain of Fools hitmaker. Devon added that the late singer’s voice always inspired her profoundly and was a big part of shaping her spirit, finding her voice and power. Apart from that, her dad must also have played a big role in influencing her passion for music.

Furthermore, the actor’s baby girl has grown up to be a beautiful lady. She completed her high school education at Malibu High School. Afterward, she studied at Yale University and as per TV Insider, she earned her undergraduate degree in 2016. In addition, the gorgeous girl also studied at the London Academy of Music and Dramatic Art.

A Martinez’s Daughter Is Into Acting

Devon seems to have inherited some good acting-singing skills from her parents. According to her IMDb page, she made her debut by appearing as a saloon girl in the 2013 short movie Four Winds. After that, the beautiful lady landed her first major role in The Young and the Restless television series. She portrayed the character of a young pregnant woman, Shawn Taylor, who searches for the ideal parents to adopt her baby.

Moreover, the Yale graduate also has producing and acting credit for the short movie Before Your Eyes. However, A Martinez’s daughter has not worked on any other projects since 2016. Besides, Devon is also into singing and used to perform in various events. For instance, the Malibu High alumna sang her original song Shelter in the Shade at the Talking Stick in Venice, California, in September 2012.

Additionally, the young artist must be earning considerably from her different endeavors. Thus, Devon Makena Martinez’s net worth must be a significant sum. On the other hand, her father, A Martinez’s net worth is $8 million. Regarding her love life, The Young and the Restless actress has not revealed any details. Thus, it is unclear if she is dating anyone or not. Let’s hope we will hear about Devon Makena’s boyfriend in the coming days.

Altogether, A Martinez’s daughter has grown up to be a beautiful lady and is passionate about music and acting. In addition, she is also a generous person who actively supports different causes and programs. We wish Devon Makena Martinez a successful career and wonderful life ahead.