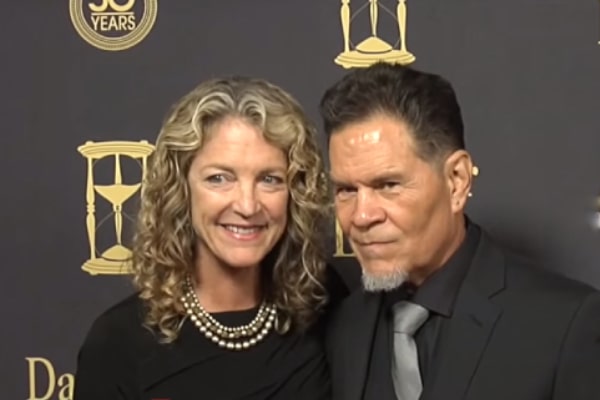 Born Adolfo Larrue Martinez III, A Martinez began his professional career at the age of 12 as a singer and earned a talent competition title. He has also established his name as an actor, writer, and producer. Additionally, he is known for his movies like Powwow Highway, Ambulance, Curse of Chucky, and Longmire.

Besides his epic performances in the movies and shows, the actor is a married man with few kids. On top of that, he has been married twice. The Cowboys star first tied the knot with Mare Winningham, which lasted just a year. Currently, the Califonia native is happily married to Leslie Bryans. In addition, the pair’s first meeting was quite interesting. So, let’s get to know A Martinez’s wife and their story in this article.

Met On A Film Set

Leslie and her husband’s first encounter dates back to the early eighties. Both initially met on a film set, though as per Adolfo’s words, both had no reasons to be there at that time. Furthermore, A Martinez’s wife was operating an Arriflex camera, which was also her first time using it. The veteran actor’s spouse first saw him before she climbed behind the camera and didn’t know he would star in the movie. Even so, she thought he was special. She also noticed how warm Martinez was as he talked to little kids and greeted his co-stars.

And, when Leslie saw Martinez through her camera, she thought it was a beautiful view, and there was an extra sparkle as well. Fast forward a few years, the pair walked down the aisle on 17 July 1982. Ever since they have been happily together. Not only that, the Matinez couple has created a beautiful family of five. Leslie also frequently appears on her husband’s Instagram feed.

While sharing a sweet photo, the Longmire star said that his marital life with Bryans has deeply been nourished by their endless love of the cinema. He further added that they have collaborated on writing, producing, and performed on various projects.

Also Read: Meet Rob Marciano’s Wife – Eryn Marciano – Why Are They Divorcing Each Other?

A Martinez’s Wife Is A Singer

Leslie Martinez seems to have outshined and made her own identity apart from being the renowned actor’s spouse. As per her Facebook account, she is a singer at New Old Music Group. Leslie’s son once shared her singing clip on IG and said growing up, he had always heard her singing well. He also expressed his pride in seeing his mother on the stage, showcasing her talents to the world.

In addition, the gorgeous lady is a realtor at the Coldwell Banker Realty – Malibu Office. Mrs. Martinez is originally from Los Altos, California, and went to Los Altos High, Saratoga High, and San Rafael High Schools. Furthermore, she also studied at Stanford University.

Additionally, glassdoor reported that a person working as a bank realtor earns $62,276 per year. Also, a singer earns an average of $77,166 annually. As a result, Leslie Martinez must have pocketed a commendable sum. On the other hand, her husband, A Marinez’s net worth is $8 million, which he accumulated in his career spanning over five decades.

Also, the Martinez family shares a close-knit bond with each other. They often share pictures of them spending quality time and never miss to wish on one another’s special days.

Altogether, A Martinez’s wife is a loving partner and a doting mom, with a melodious voice. Having been together since the 80s, the duo must have had their share of ups and downs. But, together the lovely pair have remained strong and are leading a beautiful family. Let’s wish Adolfo and Leslie Martinez a more prosperous life ahead.