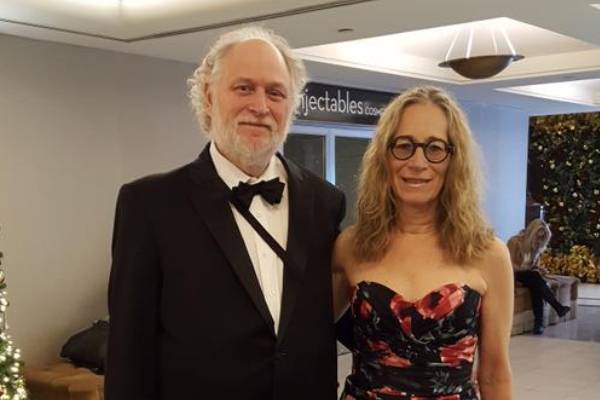 Seth Rogen, born Seth Aaron Rogen, is an American actor and comedian from Vancouver, Canada. He originally was a stand-up comedian who later started to make appearances in a number of comedy series and movies. Furthermore, he has also worked as a filmmaker and writer and has become a successful and wealthy celebrity in Hollywood.

People who are fans of him and who follow him are often curious to know where he got his comedic skills from. Are his parents, comedians too? What do they do for a living? These are some of the common questions that arise when people talk about Seth’s mom and dad.

So, in this article, let’s learn some interesting facts about Seth Rogen’s parents.

Seth Rogen’s mom, Sandy Rogen, aka Sandy Belogus, went to Sir Winston Churchill Secondary. She has a master’s degree in social work. However, Sandy has not revealed which university she went to. Her son Seth had shared her photo during the time of her graduation.

Furthermore, Seth Rogen’s dad, Mark Rogen, also works for non-profits organizations. He was an assistant director of a Jewish Organization, The Workers Circle chapter in Los Angeles. Furthermore, Seth refers to them both as “radical Jewish socialists.” The couple sharing a common interest in social work have been married for several years.

Sandy And Mark, Parents Of Two

Seth Rogen’s parents, Sandy and Mark, welcomed two kids in their blissful marriage. The couple that met in the 1970s on a kibbutz in Israel has been married for several decades. Among the two kids, Seth is the youngest. He grew up with his elder sister, Danya Rogen, in Vancouver, Canada.

Danya is a married woman, and she shares two kids with her husband, Max Matas. Similarly, Seth is also married to Lauren Miller the daughter of Adele Miller and Scott Miller. However, Seth and Lauren do not have any kids together.

Furthermore, Sandy and Mark’s kids must have had a great time growing up together.

In December 2019, The Worker’s Circle presented its Generation to Generation Award to Seth Rogen and his dad. The father-son duo was awarded for their contributions to Jewish culture, promotion of the Yiddish language, and activism.

Furthermore, Mark’s son shared an anecdote about activism. Seth said that when he was a child, his dad made the news in the local Vancouver. He came in the news after he interrupted a Hanukkah lighting to yell at a man named Bill Vander Zalm, an adversary. He yelled at him about all his injustices. However, he did not elaborate on the “injustices” done by the man.

In the Rogen family, Seth is not the only one who is very famous. Seth Rogen’s mom, Sandy, has gained her own bit of internet fame. She is active on Twitter and has 118.2K followers. Her hilarious tweets have become an internet sensation making her famous, and at the same time, it has also embarrassed her son, Seth.

Sandy’s tweets prove where Seth got the humor. She has tweeted about everything, including her sex life, her son’s joint-rolling skills, and many others. But some of her tweets are apparently a bit too much for Seth, compelling him to retweet with the caption, “Jesus, mom.”

Wanna know how to roll a joint? Let me teach you!!! https://t.co/BctdZOWHEU

Several fans of Seth love Sandy for her hilarious tweets, and it seems like she is making a good name for herself.

Sandy And Mark Are Supportive Of Their Son’s Decision

Sandy and Mark are some of those parents who seem to support every decision their child takes. The lovely duo’s son, Seth, has been married to Lauren Miller since October 2011. Although it has been a decade since the duo tied the knot, they are yet to welcome a child.

Unlike other people’s parents, Seth Rogen’s parents are not putting any pressure on their son and daughter-in-law to give them grandkids. According to them, they don’t want to pressure them because they want Seth and Lauren to make the right decisions for themselves.

In an interview with US Weekly, Seth’s mom mentioned that her son and daughter-in-law have a dog, and she and her husband are waiting. She also added that they are OK with Seth’s decision of taking time before deciding to have a baby as they already have grandchildren from their daughter.

Seth Rogen’s Mom Was Confused Over His New Casting

In September 2021, Seth Rogen’s mom tweeted about her son’s new casting as Donkey Kong in Nintendo’s upcoming Mario Movie. According to her tweet, she does not seem exactly sure on how to handle her child being Donkey Kong. The tweet left fans and followers to contemplate whether she was just genuinely confused or displeased by the entire thing.

Nevertheless, Seth Rogen’s parents must be proud of their kids’ achievements. Both of them have been the biggest supporters of their son in his career. And we hope that they continue their support in the days to come, and Seth makes them even prouder.