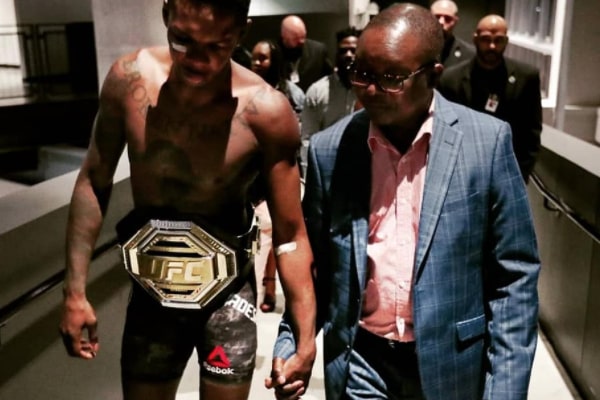 If it weren’t for the support from Israel Adesanya’s parents, he would not have reached such heights. The UFC champ has fought notable opponents like Paulo Costa, Yoel Romero, Robert Whittaker, Kelvin Gastelum, Anderson Silva, and Derek Brunson.

The UFC’s next big thing holds the record of 20 wins and 1 loss, which came by the hands of light heavyweight UFC champion Jan Blachowicz. Despite everything, Izzy has always shown his gratitude for his parents.

Below let’s look at Israel Adesanya’s parents and get to know them better.

Also Read: Vin Diesel’s Parents And Their Love For Their Children

The no.4 ranked pound-for-pound UFC male fighter was born to Oluwafemi Adesanya and Taiwo Adesanya on July 22nd, 1989. Residing in Lagos, Nigeria, Israel, Adesanya’s father was an accountant.

As for his mother, Taiwo worked as a nurse. Since both professions are well-paying jobs, the 31-year-old was able to live happily in a privileged fashion. Israel Adesanya’s parents also had four other kids.

Oluwafemi and Taiwo, including their fighter son, have five children in total. The 6’4″ fighter is the eldest and has two brothers & sisters each.

Other than the City Kickboxing Fighter, all of Israel Adensanya’s siblings have followed in their parent’s footsteps. Deborah Adesanya, the second eldest, is a nurse. Followed by Samuel Adesanya, who is also a nurse.

David Adesanya is also 26-years-old and has followed his father’s path by becoming an accountant. Lastly, Bolu Adesanya, the youngest in the family, is 20-years-old and still a student.

Despite living in different cities, Israel Adesanya’s dad and mom have taken good care of by his siblings.

Moved From Place To Place For The Best of Their Children

Israel Adesanya’s parents had a prime goal of providing proper and sufficient education to their kids, due to which they moved from place to place.

Back during their Lagos days, Izzy attended Chrisland School, where he would enroll in Taekwondo. Not long after, the middleweight champ’s family would relocate to Ghana for 10 months.

For better career opportunities and proper studies, Oluwafemi and Taiwo would take their children to Rotorua, New Zealand. One of UFC’s best strikers, Israel, was only 10 and attended Rotorua Boys’ High School.

While the 2018 Breakthrough Fighter of the Year for MMA fighting would have more exposure to MMA, his siblings would also receive a proper education. So much so, two of them are nurses and one an accountant.

Israel Adesanya, as mentioned above, always shows his gratefulness to his parents. During the UFC 259 tour, the purple belt in Brazilian Jiu-Jitsu donned a t-shirt with a picture of his father and “Dadesanya” written below.

Izzy calls his father Dadesanya, who also gives him advice regarding his opponent. One such instance is when Adesanya fought against the Brazilian muscle head, Paulo “Borrachinha” Costa.

Before the bout, the UFC 4 cover athlete had his hair colored in neon pink, due to which many fans speculated him to be gay. On the other hand, Israel Adesanya’s dad gave him the advice of coloring it back to normal since the bright color would make his head more visible to his opponent. The anime-loving fighter eventually won via knockout and would address this matter at the post-fight press conference.

Furthermore, after his win against Robert Whittaker, Israel bought out his family into the Octagon.

Just by looking at the video itself, one can easily understand how much Israel Adesanya’s parents mean to him.

From bringing his parents in the octagon after his biggest wins to buying them different assets, the New Zealand-based fighter has always shown his gratitude towards his family.

Despite failing in his attempt to become a two-division champion, Oluwafemi’s eldest born gifted him an expensive set of wheels. Israel Adesanya’s father received a Bently GT from him, which cost around $210,000.

The fighter would post this act of kindness on his Twitter handle, with the caption, “When you help me garden, you deserve all the flower.” This happened just a few weeks after he gifted his mother, a red Porshe.

Israel Adesanya’s mother received her gift during the build-up of the event and his father after UFC 259.

Regardless of everything, Israel Adensanya’s parents have been his biggest supporter. He was victorious in UFC 263 against his rematch with Marvin Vettori for the middleweight title. We wish him the best for his MMA career and also for the well-being of his parents.