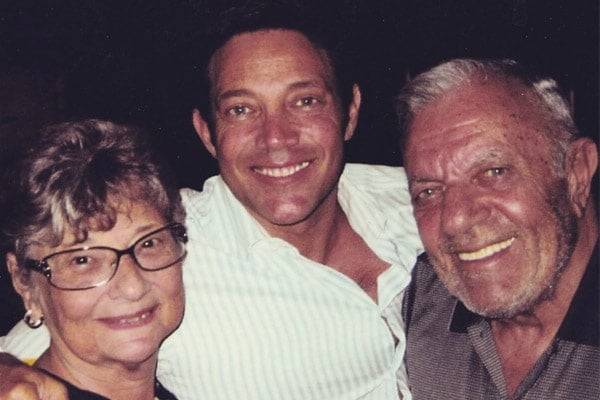 Jordan Ross Belfort, also known as Jordan Belfort, is an entrepreneur, author, and former stockbroker from America. He published the memoir The Wolf of Wall Street in 2007 and was one of the most significant players in the stock market during the 1990s. Now he has stopped working as a stockbroker and is doing great in his entrepreneurship ventures.

Because of Jordan’s fame, his family members, too, have come into the limelight. He is one of the two children of his dad and mom, Max Belfort and Leah Belfort. Thus, in this article, let’s learn in detail about Jordan Belfort’s parents and their whereabouts.

Jordan Belfort’s dad Maxwell Belfort was born on July 5, 1931, to Jacob “Jack” Belfort and Ann Brody. When Max was seven, his family moved to the Bronx from Jersey City, New Jersey. Max’s dad used to work as an elevator operator, and he became an accountant.

In 1955, Max got married to Leah Markowitz, who was 22-year-old at that time. Her parents were upholsterers from Lithuania. Four years after their marriage, on October 27, 1959, Max’s wife gave birth to their first child Robert Belfort.

Then, two years later, in 1961, Leah was pregnant for the second time. The three of them left the Bronx and moved to a two-bathroom, two-bedroom apartment in a brand new co-op building in Bay Terrace. On July 9, 1962, she gave birth to their second child, Jordan Ross Belfort.

Jordan Belfort’s mom and dad raised him and his brother in New York. The experience growing up in their neighborhood might have helped Jordan achieve what he aspired to as a child.

Max and Leah raised their kids in a decent and humble family. As mentioned earlier, Jordan Belfort’s mother and father worked as an accountant. Many sources have claimed that Max was a Certified Public Accountant. Furthermore, according to Jordan, his dad used to work really hard to make money. Despite this, Max could never earn and save enough to raise Jordan and Robert well.

In his memoir Wolf of Wall Street, Jordan has described his dad, Max, as an ill-tempered person, which was why he could not earn more than he deserved in his life. Furthermore, because of his fiery personality, many opportunities passed by and he even slammed shut many sources of opportunity.

In her sixties, Leah went and studied Law at St. John’s University. She became the oldest woman in New York State to pass the bar. She currently practices pro bono law for battered women.

According to his memoir, Jordan Belfort’s parents were overbearing and pushy. He even called his dad “Mad Max” and feared his vodka-drinking and chain-smoking fury. The film based on the memoir has some of the clips related to him and his dad which is portrayed by Leonardo DiCaprio and Rob Reiner, respectively.

On the other hand, he described his mom as a Jewish mom who was on steroids and demanded he starts studying for medical school from a very young age.

Nevertheless, Jordan’s dad and mom raised their kids and also made a name for themselves in the field of accountancy.

Also Read: Know About Steve Ballmer’s Parents And Their Work

Jordan’s Dad Has Passed Away

As mentioned earlier, Jordan Belfort’s parents raised him and his brother decently. Although they had financial problems during the initial phase of their life, the Beffort family was later able to live a comfortable life. They both supported their kids no matter what. His parents’ struggle motivated Jordan to work harder, which later made him a successful entrepreneur.

The entrepreneur always credits his father for any of his achievements. Sadly, he lost his dad in September 2019 at his home in Bayside. Jordan shared the news of his death via Facebook. In the caption, he referred to his father as Mad Max and credited him for being the best dad that he could have asked for.

Although Max is no more now, his teachings and preachings are alive through his kids. It must have been hard for Leah and the kids to lose their husband and father, respectively. But the family must be honoring his words and legacy by working hard.

In many years of togetherness, Jordan Belfort’s parents loved and supported each other. Let’s hope Leah is doing great for herself, and wherever Max is, he must have found peace.