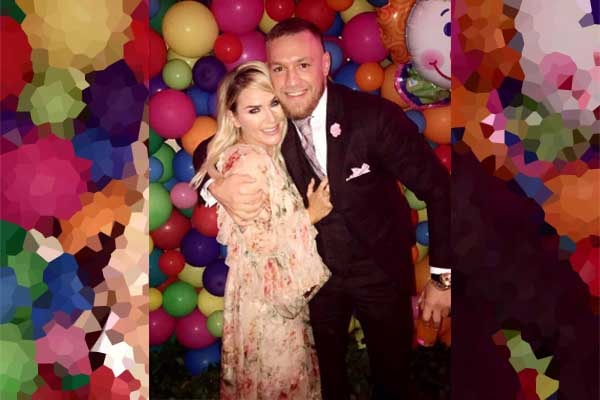 Any UFC fan will be well aware of the MMA fighter Conor McGregor. He has headlined many UFC pay-per-view events for nearly a decade. In addition, he is the former Ultimate Fighting Champion, Lightweight, and Featherweight Double-Champion.

The mixed martial artist has been turning heads since the beginning of his career. Similarly, anyone affiliated with him naturally falls under the spotlight. And Conor McGregor’s sister, Erin McGregor, hasn’t been able to evade that.

While many recognize Erin for her constant support to her sibling, it isn’t the only thing she excels at. Conor McGregor’s sister, Erin McGregor, is a well-known dancer and a former participant in Dancing With The Stars.

So, let’s learn more about this beauty in this article.

Erin Is The Eldest Child Of McGregor Family

The performer was born on June 2, 1981, in Ireland. She is the eldest child of her parents and has always looked after her younger siblings from a young age. Erin McGregor’s father, Tony McGregor, is a poet and sailor. He occasionally captains his son’s private yacht, The 188, and shares the videos on YouTube.

Erin McGregor’s mother, Margaret McGregor, has always supported her career choice. She also attended Dancing With The Stars to cheer for her.

The media person is very close with her younger brother, Conor. She never misses out on his matches and always supports him from the sidelines.

The dancer’s younger sister, Aoife McGregor, is a make-up artist and famous Instagram personality. She was previously married to her ex-husband, Mark Elliott, but separated in 2021.

Conor McGregor’s Sister Is In A Loving Relationship

Erin McGregor’s boyfriend, Terry Kavanagh, is a ring announcer and courier. He has emceed Bellator MMA, MTK Global Boxing, Sky Sports Boxing, and BT Sport. In addition, he is a singer and has a single Live My Life.

The couple first met at the UFC fighter’s match and instantly connected. Both celebrated their seventh anniversary at Conor’s pub, The Black Forge Inn, in October 2021.

The pair undoubtedly share a strong bond, considering their years together. Both are very supportive of each other’s professions. Moreover, Erin McGregor’s partner, Terry, became responsible for finances during her maternity leave.

The duo doesn’t hesitate to show their chemistry on social media. The lovebirds’ Instagram accounts are filled with their date nights, travels, and vacations pictures.

Is A Loving Mother Of Two Children

The blond beauty is a loving mother of two adorable kids. She was only nineteen when she gave birth to her daughter, Taylor McGregor.

Conor McGregor’s niece, Taylor, was born in August 2000. She had a lavish 21st birthday celebration at his pub on Drimnagh Road in Crumlin. Furthermore, Taylor is a beauty like her mother and has a massive fan following on Instagram.

Erin McGregor welcomed her son Harry McGregor Kavanagh in July 2016. Sadly, he has been diagnosed with sensory issues.

Conor McGregor’s sister, Erin, suffered from panic attacks after learning about her child’s condition. She initially didn’t share much about it but has now opened up to social media regarding her son’s condition.

Erin Is A Former Competitive BodyBuilder

The dancer was interested in fitness from earlier. She took bodybuilding training and participated in many contests. In addition, she won Miss Bikini at the National Amateur Bodybuilders Association’s Mr. Ireland competition in 2013.

However, the fitness model decided to leave bodybuilding before the birth of her second child. She also stated it was due to the criticisms over her body.

Is An Entertainment Reporter And Has Launched Hair Care Products

Apart from her bodybuilding days, Erin initially worked as a hairdresser. Her expertise in hair styling has seen her collaborating with Voduz to launch several hair care products. Moreover, her collections are available for $74.55 (£55).

The hairstylist is now working as an entertainment reporter for TV3’s Xpose. She joined the show as the replacement for Glenda Gilson in 2018. She has been a constant host in the program since.

Participated In Dancing With The Stars And Panto

As mentioned earlier, the gorgeous lady has established herself as a well-renowned dancer. She proved her worth after participating in Dancing With The Stars in 2018.

The mother of two started as an underdog with her dance partner Ryan McShane in the show. She faced many ridicules online due to her dancing background. But, the performer delivered incredible performances each week and slowly won people’s hearts.

Conor also came to support his sister, Erin, on the show. Sadly, the dancer was eliminated in the semi-finals after her dance-off with Jake Carter. Nonetheless, her journey inspired many people around her.

After the show, the artist made her debut in Olympia Theatre Pantomime as Ann-Wha in 2018. She continued her role in 2019 and 2020.

Although Erin couldn’t make it to DWTS’ finals, she earned a reputation as a dancer. Hopefully, we might again see her performing in other dance shows in the future.