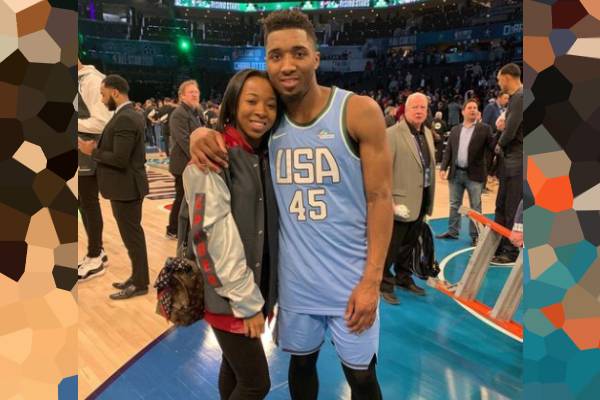 Donovan Mitchell Jr., simply Donovan Mitchell, is a renowned professional basketball player who competes for the NBA’s Utah Jazz basketball team. He was named the 13th overall pick by the Denver Nuggets during the 2017 NBA draft. But he was later traded to the Utah Jazz.

Being a spectacular shooting guard for the NBA’s Utah Jazz, Mitchell has unavoidably remained in the limelight for years. Additionally, even his sibling has received some spotlight. Thus in this article, we will be getting to know Donovan Mitchell’s sister and the bond between the two.

Jordan Mitchell is the youngest daughter of the Mitchell couple. Her birthdate has not yet been revealed. Hence, it is hard to assume Jordan’s age, and how many years apart the Mitchell siblings were born.

Jordan and her brother attended Greenwich Country Day School and later went to a boarding school, Brewster Academy. The siblings’ mom taught at GCDS from 2007 to 2019 in the Lower Elementary School and kept an eye on their study progress. The young lady is currently in her sophomore year, studying business at American University.

Much like her big brother, Jordan Mitchell is also a sportswoman. She is passionate about the team sport lacrosse. The talented girl plays lacrosse at her college, American University, and also previously played for her former high school, Brewster Academy.

Did you know that Jordan and Donovan Mitchell’s father, Donovan Sr., was a Minor League Baseball player? Being born to a dad who was a sportsman, it isn’t surprising that the Mitchell siblings are athletes. So, it must have been completely natural for the brother-sister duo to follow in their dad’s footsteps.

It seems Donovan’s younger sibling loves sharing pictures on her social media handles. She frequently uploads photos on her VSCO and Instagram accounts. Jordan currently has over thirty-one thousand followers on her Instagram account, where she mostly uploads images about herself.

As per her social media accounts, the talented lacrosse player doesn’t seem to have anyone she is dating at the moment. However, her Instagram doesn’t give hint at Jordan Mitchell’s boyfriend/relationships. Still, Jordan seems happy to spend her time with her friends and family. It appears that she is focused on her lacrosse games.

Was A Part Of One Of Donovan’s Dunks

Donovan Mitchell’s sister was a part of one of his dunks that led him to win the NBA Slam Dunk Contest in 2018. The Jazz star wanted Jordan to be a part of this as an appreciation for all the sacrifices she has made as he grew up playing basketball. Donovan further explained why his sister being part of his winning routine was so important to him.

I definitely didn’t do this Donovan Mitchell quote justice earlier, but NBA transcription services did. Mitchell got worked up while talking about why he wanted to include his sister, Jordan, in his second dunk: pic.twitter.com/hjhmjF4cDC

In an entirely different incident, the Jazz star made headlines for playing a prank on Jordan while attending her online class. He posted a short video of himself sneaking up behind her as he held a sign that said, “Hey guys!” while waving at her class. Donovan Mitchell’s sister was visibly embarrassed by him and tried to shoo him away.

It’s evident that Dovonan loves and supports his baby sister very much but also seems to enjoy teasing her. It seems the brother-sister bond between Donovan and Jordan is a strong one. They not only love and support each other in whatever they do, but they also have fun with each other. Nonetheless, we hope the brotherly-sisterly love the siblings have stays the same even in the future.