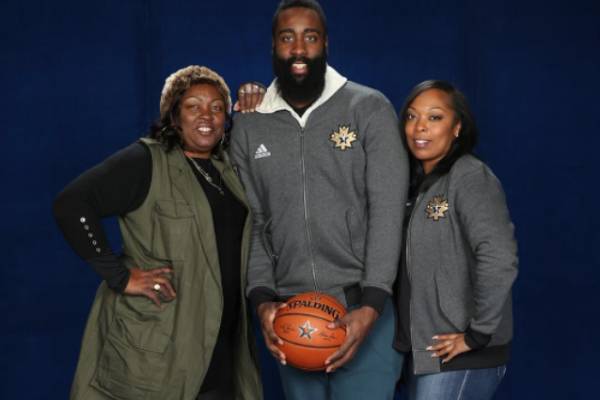 James Edward Harden Jr., or James Harden, is a renowned professional basketball player who is currently playing for the Philidelphia 76ers of the NBA. He is one of the top players in the NBA and one of the league’s most valuable scorers.

Being one of the top-rated basketball players, Harden has always been in the limelight. Additionally, his family has also received some spotlight at various points over the years. Due to this, it is no new information that the NBA star is the youngest among his parents’ three children. Hence, today, we will be getting to know more about James Harden’s siblings.

The shooting guard has an older half-brother whose name is Akili Roberson. Moreover, he is James Harden’s mother, Monja Willis’ eldest son. Yet, many people might not know about the fact that Akili is a talented athlete, just like his little sibling.

Roberson played football over the years and even has made a name for himself as a skilled quarterback on the gridiron. He played football at his former high school, Alain LeRoy Locke College Preparatory Academy, L.A.

After that, the skilled football player applied to L.A. Southwest College to continue playing the sport and later to the University of Kansas. Following his collegiate football career, Roberson then proceeded to Arena Football League.

Akili is now a happily married man. As per a tweet from his aunt, Roberson held his wedding on August 5, 2021, in St. Thomas.

Me and my newly nephew James at my niece’s wedding 8/5/2021 in St. Thomas
Congratulations to my niece and nephew Mr. and Mrs. Akili Roberson this is a blessed union. pic.twitter.com/IGQ21vB2Mh

Unfortunately, we could not find any further information about his married life as he has switched his social media handles to private. So, it seems James Harden’s brother is a person of privacy.

Arnique Jelks Is A Stylist

Arnique Jelks is the elder sister of the NBA star James Harden. She is the only child of the Monja Willis, who isn’t involved in any sports. However, Jelks wanted to be a cheerleader, and her wish to be one was supported by her family.

Arnique is an entrepreneur, a wardrobe stylist, an apparel and fashion professional, and an interior designer. She has been working at a fashion company, BCBG Max Azria, as a customer service specialist since 2019.

Additionally, Arnique was previously a director at 3 The Harden Way, Inc., a domestic nonprofit corporation, along with James. Their mother, Monja, is currently working as an executive and director for the corporation.

Going through her Instagram profile, Jelks has three sons named Jordan, Justice, and Jamori Wiliams. Her son, Jamori, plays football for the team at Manvel High School. He previously played for the boy’s varsity football team at Episcopal High School. Unfortunately, no further information could be found about Arnique’s baby daddy.

Harden is also very close with his nephews. He often appears with the kids on his sister’s Instagram posts.

We couldn’t find Akili’s birth details, making it hard to assume his age. However, it seems he and James were born about fourteen years apart. Despite their huge age difference, the brothers spent their early life together. Maybe it’s because both of them are sportspeople, they seem to understand each other.

When asked why Harden didn’t follow in his big brother’s footsteps in playing football, he answered that he was taller than Akili. As per Time, Roberson mentioned how his little brother always had a basketball in his hands as if it was his job.

Likewise, it is evident just how much love and respect James Harden’s sister has for him going through her social media content. Arnique frequently posts about Harden with hashtags like #realsister, #mybrotherskeeper, #teamharden, #loveyoulikeafatkidlovescake, etc.

From the looks of it, James Harden’s siblings absolutely adore and support him. The 32-year-old shooting guard is very lucky to have a loving brother and sister. Well, we wish James and his siblings all the best in their upcoming days.

Interesting Facts About Sianoa Smit-McPhee, She Is Kodi Smit-McPhee’s Sister