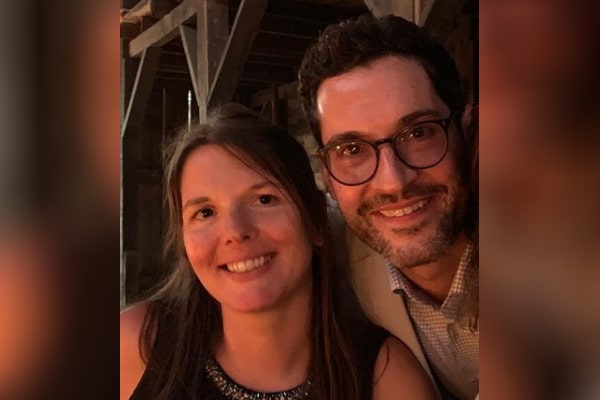 Tom Ellis, the Lucifer star, became a popular television icon after slaying the leading role of the devil himself in Netflix’s Lucifer. The dashing poster boy of the 21st century is not a new face in the ladies’ department.

Apart from acting, the father of three has a couple of interesting facts that might shock his fans. The Welsh actor is a talented multi-instrumentalist and is very religious in nature. He inherited the religious background from his upbringing and family, which was a female household.

The 6′ 3″ actor is the only son out of four children in the Ellis family. On a more surprising note, the 42-year-old actor has a twin sister. Information regarding Tom Ellis’s twin sister is very little. Let us took into the actor’s personal life in regards to his twin sister and more.

It is more fitting when Lucifer’s twin sister is named Lucy. Lucy Ellis Hawkins is Tom Ellis’s twin sister, and they have two other siblings. They are fraternal twins. Unlike her twin brother, Lucy is very private and stays away from her sibling’s fame and fortune.

It has often been difficult to meet, and reminiscence about their childhood as both the twins are busy with their lives. The actor is busy with his shooting, and regarding his twin sister, very few details are available. Likewise, her Instagram is also private, with eight posts and 48 followers. But what we do know is that Lucy Ellis Hawkins is married.

The Other Two Siblings

The twins have two more younger sisters aside from each other; Annwen Ellis Stone and Naomi Ellis Moody. One of the sisters from Lucy and Annwen has followed in their father’s footsteps in becoming a Baptist minister. But there is no information available regarding who exactly it is?

On the other hand, Naomi Ellis is the youngest among the siblings and a neurological ward in Sheffield. Like most NHS members, Naomi also works tirelessly for the well-being of others.

Whereas Annwen Ellis Stone, married to Andy Stone, is a mother of three. While Naomi is busy with her hospital duties, her sister is seen spending quality family moments whenever she gets the chance.

The Cardiff born might be busy with his shooting and family but is never shy to show his love for his sisters.

Married To A Musician

Tom Ellis’s twin sister Lucy is very different than him when it comes to love and marriage. The lord of hell has married twice, and his twin only once. Married to Christopher Hawkins, Lucy Ellis is enjoying a happy and stable marriage. The musician is a pianist and performs in musical theatres and studios.

We do not know any in-depth details relating to the composer’s marriage with Tom Ellis’s twin sister Lucy. However, the pair must share a beautiful bond as they both love music. Furthermore, it looks pretty apparent for the music-loving actor to bond with his brother-in-law since he often promotes his show via social media.

There are very few details available regarding their marriage. Both Lucy and her partner, Chris, are very serious about keeping their relationship confidential, and similar is the case with their children. Although we do not know if the Hawkins pair welcomed any children, Lucy’s Instagram DP features two little girls.

Additionally, in April of 2020, the powerful angel posted a picture of his youngest niece, Eva, with his Grandad, but other details are not shared. This has led the public to wonder whose daughter is Eva actually, out of the three sisters.

Lucy’s twin brother Tom is a very religious person, as cited above. The main reason has to be their involvement with the church and their father being a Baptist minister. Religious norms and values always surrounded the Sheffield natives as one of Tom Ellis’s three sisters would continue the family legacy of becoming a Baptist minister.

Lucy and her twin brother were part of a female household as the will power bleeding actor was the only boy child. The multiple award nominee also expresses his gratitude towards such family circumstances as it has made it easier around the ladies for him.

Based on a DC character, the immortal Lucifer might be fighting angels and punishing humans but began acting for the first time in his father’s church play. Due to the family’s religious nature, we can only assume his siblings also acting alongside him.

Despite the differences, Tom Ellis and his twin sister have always got each other’s back. We hope to learn more about the twins bonding and their siblings in the days to come, but as for now, let’s respect the decision made by Tom Ellis’s twin sister to keep things discreet and private.

Who Is Got7’s Jackson Wang’s Brother? Jackson Is Also Close To His Niece

Sadly, Jamie Foxx’s Sister Deondra Dixon Passed Away At The Tender Age Of 36

Tahiti Hernandez Is Already Married, Find Out What Does Bruno Mars’ Sister Do?